Borrowers Not Borrowing: What It Really Means for the Economy

This headline on the front of the Wall Street Journal Wednesday caught my eye: "Borrowers Pass Up Mortgage Windfall." Interestingly, the digital edition ran the very same article with a different headline: "Borrowers Miss Out on Billions in Savings."

I suggested earlier any signs like this of consumer deleveraging could have severe consequences for the economy. Consider that in 2005, homeowners cashed out roughly $1.4 trillion of their homes' equity. This is equivalent to fully 10% of total United States GDP. 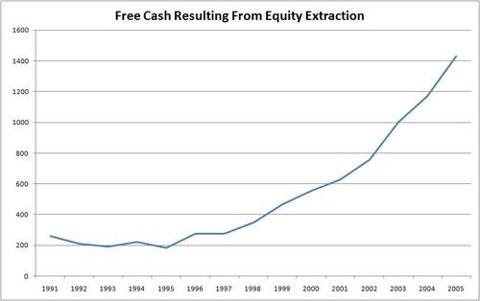 Obviously, after the devastation in home prices we've witnessed over the past five years this level of "cash-outs" will not be seen again for a very long time. That equity is gone and thus so are the cash-outs. 10% of GDP has essentially vanished since the real estate bubble popped. Should homeowners continue to gravitate towards an attitude represented by the "cash-in" trend, that will make for an even larger economic headwind.

What is even more troublesome is that while the Fed and Congress have great power to influence the banking system to increase the flow of credit they have very little power to encourage consumer spending if households are focused on shoring up their balance sheets. This is why I am prepared for a prolonged period of sub-par economic performance in both my businesses and my investments.

These two very different headlines for the same story tell an interesting tale. There's a big difference between "pass up" and "miss out." The first suggests that borrowers are rejecting the opportunity to refinance; the second suggests they simply can't qualify for refinancing. That the Journal ran both reveals the current debate about whether banks or borrowers are to blame for the current dearth of credit creation.

It's important to try to distinguish between the two because many are accusing the banking industry for the lack of credit creation when there is ample evidence that borrowers simply don't want to borrow any more. If banks are really the problem then there are many ways that Washington and the Fed can give them incentive to lend to help stimulate the economy. But if borrowers simply don't want or need any more debt then there are massive implications for the economy.

I believe it is a combination of the two but I also strongly believe we can't afford to discount the power of a consumer shift toward deleveraging. Obviously, banks have tightened lending standards. Stated income loans and 120% LTV programs are history. We may never see them again in our lifetimes.

However, there is also ample evidence that consumers are now shunning the leverage that created the twin internet and real estate bubbles in the first place. Nick Timiraos writes in the Journal article mentioned earlier,

Around 37% of all borrowers with 30-year conforming fixed-rate mortgages—who collectively hold about $1.2 trillion of home loans—have mortgage rates of 6% or higher, according to investment bank Credit Suisse. Many could reduce their rates by a full percentage point if they refinanced at current rates, about 5%. More than half could lower their rates nearly three-quarters of a percentage point, according to Credit Suisse.

But new refinance applications in January stood near their lowest levels in the past year. Weekly data compiled by the Mortgage Bankers Association also show that refinance activity has been muted, considering that rates are so low...

The last time mortgage rates were at current levels, in 2003, refinancing activity hit $2.9 trillion, according to trade publication Inside Mortgage Finance. Last year, refinance volume reached $1.2 trillion, the highest amount since 2003 but not nearly as much as expected, considering how low interest rates have fallen.

Tighter lending standards must be factored into this decline in total refinancing volume as it's safe to assume that the 25% of mortgage holders currently "underwater" are effectively precluded from refinancing. But I have to believe many of the other 75% of homeowners with at least some equity (Americans still have roughly 50% equity in their homes in total) are simply choosing not extend the duration of their indebtedness.

The Los Angeles Times recently published an article on an interesting new trend towards, "cash-in" refinancing rather than "cash-out" refinancing which was so popular over the past decade or so.

Cash-outs hit their highest level of popularity during the wild appreciation streaks in the early and middle years of the last decade. In mid-2006, just before home values began deflating across the country, the rate of cash-outs hit 88%, according to Freddie Mac (FRE), which monitors refinancings quarterly.

This meant that nearly 9 out of 10 refinancers whose loan files were sampled by Freddie Mac increased the size of their mortgage balance by at least 5% in the process. It was the heyday of the pile-on-more-debt mind-set -- cash me out, I can't lose on my real estate -- that came crumbling down in 2007 and 2008, when home equity holdings shrank drastically and painfully...

Now the pendulum in consumer psychology appears to be swinging toward reduction of household debt -- whether on credit cards or mortgages.

In Freddie Mac's latest quarterly survey of refinancings, 33% of homeowners put cash into the deal to lower their mortgage balances, the highest percentage ever. By contrast, only 27% of refinancers took cash out -- the lowest percentage on record...

Cash-ins, in effect, are a disciplined form of saving -- one that in today's depressed rates for competing types of savings might be an astute financial move.