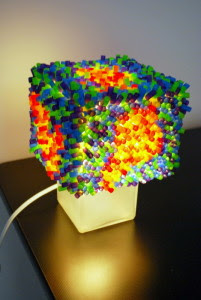 Made from plastic drinking straws, Matthew's shade is the perfect way to revamp that hold lamp. Photo: Amanda Wills, Earth911.com

It’s the last week of our Ultimate Reuse Challenge that called on the Earth911 staff to come up with creative ways to reuse common and hard-to-recycle plastics.

Over the past three weeks, we have featured the top designs.

Here are this week’s designs:

Made of plastic #5 polypropylene, drinking straws are actually the same resin as bottle caps and medicine bottles. But there’s just one catch: Their small size and light weight make them harder to recycle. But as an artist, craft lover and former architecture student, Matthew was up to the challenge.

“My family is really into projects,” he says. “We save and reuse everything we can and use items for cool projects. In fact, every gift I give my wife, I usually make it.”

Matthew, his wife and 3-year-old son collaborated on several design ideas and tried to better understand how the material worked. Matthew even attempted to melt the straws to create a mold – an idea that he says was a disaster. 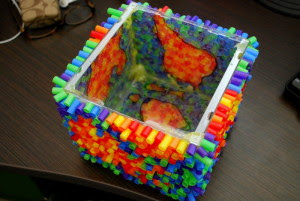 Matthew chose a globe sketch because "It seemed like the Earth911 thing to do." Photo: Amanda Wills, Earth911.com

“They shriveled into a ball. And when I tried melting them slowly, they gave off a really toxic fume. You’re dealing with a high amount of sensitivity because the straws are thin and hollow, so you have to have high heat,” Matthew explains.

“Think if it like this: It’s the difference between setting a piece of paper on fire and lighting a phone book on fire.”

After a lot of trial and error, Matthew says he began to think of ways to keep the material intact, while reusing it in an eco-friendly way. He wanted something practical that his son could also be a part of, this led to the idea of the lamp shade.

Matthew’s shade was made as a way to revamp an old lamp instead of spending money a new one.

Step 1: Draw a design concept if you want your straw colors to form shapes.

Step 2: Cut the straws in quarter to half-inch pieces. 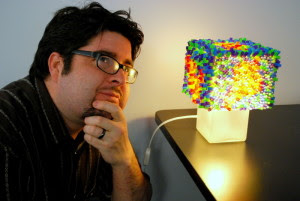 "Once I was out of the experimental phase, the actual project it only took two hours at the most, but a lot of this was due to having a 3-year-old cut the straws," Matthew says. Photo: Amanda Wills, Earth911.com

Step 3: Lay the CD cases open and face-down. Break one case in half, as you will only need one side. You will have five sections total.

Step 4: While CD cases are opened flat, glue straws in desired pattern. Set aside about 30 straws, as these will be used later to fill in the seams. Allow to dry for about three hours.

Step 7: Apply glue to the edges of your remaining CD case and attach it to the top. Note that you will have a gap. Use your leftover straws in fill in this space.

Step 9: Simply place the shade over your lamp. Make sure your bulb does not touch the shade in order to prevent melting.

Matthew’s bonus tip: Cutting the straws is harder than you may think as the cut pieces will fly off of your scissors. Matthew used a large plastic tub so that the pieces would fall into one concentrated area. 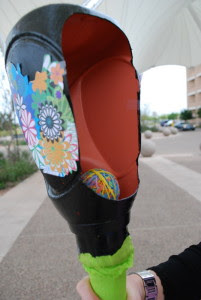 Made of plastic #2, plastic detergent bottles are commonly recycled in curbside programs. But their thickness makes them a great material for many types of reuse projects.

Plastic #2 is translucent and relatively stiff. These properties create a strong barrier, are suitable for high temperatures, and the material is virtually crack-resistant.

At first, Stacy was not excited at all about this project. But she succumbed to peer pressure.

“OK, I really did end up having fun, and it was a cool team-building exercise,” she admitted.

When thinking of her project, Stacy wanted to do something that could be used outdoors for fun.

“It may not be the sturdiest of projects, but the idea is definitely there,” she says.

To reinforce the durability of the lacrosse stick, Stacy used PVC pipe, which is very strong and and able to withstand high impact.

What you’ll need: One detergent bottle, 1½-inch wide PVC pipe (you may have to get this cut), paint, glue, one bag of rubber bands, scissors 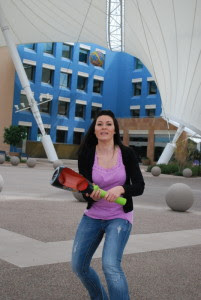 "I didn't want to do the project at first. I was reluctant," Stacy says. "But I ended up having a lot of fun, and I think my project is rad." Photo: Amanda Wills, Earth911.com

Step 2: Remove the outer cap of the bottle and cut out the middle of cap to the edges. Leave the spout on the bottle intact.

Step 3: Apply a thin layer of glue to the inside of PVC pipe. Place PVC pipe over the spout, fitting securely.

Step 4: Apply another layer of glue around the PVC pipe. Place cut-out cap over the PVC pipe. It may take a little elbow grease to push it down.

Step 5: Paint your detergent bottle and with desired design. Let it dry overnight.

Stacy’s bonus tip: Use a package of rubber bands to make your ball. “The rubber band ball was kind of an afterthought. It was another reuse project, perfect!”

Take a quick look through your wallet. You’ve got ID cards, credit cards, gift cards and maybe even old hotel key cards you kept after check-out.

These cards are made of a plastic resin called polyvinyl chloride (PVC) that is infinitely recyclable, but often landfilled. 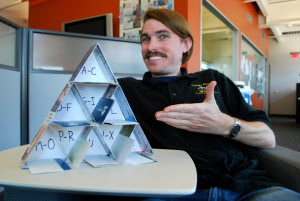 “I was worried about what I was going to get because I think that certain plastics lend themselves better to creativity, which is why it was nice when I got gift cards because they offered a lot more to me than other products would have,” Trey says.

Trey’s idea came from his fascination with building a house of cards. Since gift cards are the same size, Trey wanted to learn to make a house of cards and somehow incorporate that design into something practical.

“At first I just wanted to make a house of cards. But I knew I would get disqualified because it wasn’t really useful,” Trey jokes. “So I made it into some sort of shelf and thought of what products would fit into it.”

“We get business cards all the time and have no way of filing them,” Trey says. “They’re in an unorganized stack. But this project gives you order so that you can access them easier.” 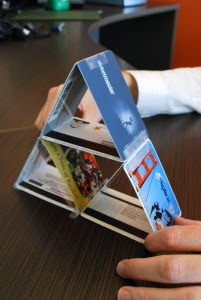 "I am happy because it was a project that provided a lot of creativity as well as some future use," Trey says. "It also allowed for me keep cards that I wouldn't have known what to do with otherwise." Photo: Amanda Wills, Earth911.com

Step 2: Use three triangles and tape them together at the base. Stack two more so that outsides line up evenly. Stack the last on top to make a pyramid. You’ll have nine slots total. Tape sides of pyramid.

Step 3: Cut cardstock into triangle shape that is the same area as your pyramid. This will serve as your background. Using tape, attach cardstock to back of pyramid.

Step 4: Using a marker, label each of the nine slots with three-letter categories (A-C, D-F, etc.).

Trey’s tip: Do not use cards with sensitive information, such as expired credit cards. You don’t want to get your identity stolen.

What’s your favorite project? Tell us! The winner will receive a donation to his or her favorite charity. Submit your feedback below, via Facebook or Twitter.

Earth911 partners with many industries, manufacturers and organizations to support its Recycling Directory, the largest in the nation, which is provided to consumers at no cost. The American Chemistry Council is one of these partners.

Amanda Wills is the Assistant Editor of Earth911.com