An Illinois investor laments that the only thing he acquired from a recent property acquisition is a big headache involving deadly asbestos. 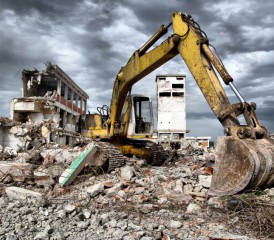 The company currently faces a $500 daily fine retroactive to Sept. 9 for failure to contain asbestos and secure the 18-acre site, according to State Journal Register. Asbestos is a carcinogen that causes mesothelioma.
The Illinois attorney general sued P. Mills and Midwest Demolition, owned by Chernis’ father, after the state’s Environmental Protection Agency inspectors discovered dozens of plastic bags filled with asbestos and asbestos-contaminated debris improperly disposed.
According to Chernis, the company already spent $15,000 to hire an environmental engineer, but it can’t afford to complete the entire cleanup.
“None of us have that kind of money. We’ve tried to borrow money, but we were turned down because of all the publicity,” Chernis said.

Commercial eyesores remain standing across the country for the same reason: Hefty asbestos removal fines.
Asbestos removal costs can easily tally into the thousands of dollars, often halting the demolition of defunct factories and commercial facilities that blight neighborhoods and become havens for vagrants and drug dealers.
Detroit’s former Packard Automotive Plant sits as a ghostly reminder of Motor City’s automotive glory days. Discussions about its fate are mixed, from restoration and rebuilding to razing the 3.5-million-square-foot structure.
The automotive plant is laden with asbestos, and regardless of the final decision, asbestos removal will be the first step, and it will come with a price tag in the tens of thousands.
Activity on the project moves slowly as owner Fernando Palazuelo expects to begin removing debris from the 40-acre site as the first phase in a 10- to 15-year plan to revive the complex, a Detroit News report shows.
In the meantime, the decaying expanse of brick and mortar continues to invite unwelcome guests and add to the already crumbling skyline.

When the Massachusetts Department of Environmental Protection (MassDEP) discovered asbestos-tainted pipe insulation at Fitchburg Properties in Boston, they didn’t hesitate to levy a whopping fine.
The real estate business owes the state $15,000 in penalties and an additional $20,625 if they violate the law again within the year, according to a report in the Sentinel and Enterprise News.
Workers improperly removed the insulation when replacing the facility’s heating system, leaving it scattered on the floor inside the building, around the loading dock and outside the building.
"Before starting demolition or renovation, property owners must identify asbestos-containing materials so they can be properly removed and handled in accordance with the regulation," said Mary Jude Pigsley, director of MassDEP's Central Regional Office in Worcester.
"Failure to do so will result in penalties, as well as escalated cleanup, decontamination and monitoring costs," she added.

For Chernis and his partners at the Pillsbury factory, the nightmare continues.
In the end, the tally for the state lawsuit could result in as much as a $50,000 fine, plus a daily $10,000 fine for each day of violations and court costs.
Additionally, representatives from the Illinois EPA say the agency will eventually hire an asbestos removal firm to clean up the site — but not at a cost to the state.
Chernis and his co-owners can expect a bill.
View Article Source

LA Testing provides environmental and air testing services to ensure asbestos found in California does not cause health concerns for area residents.


A recent article highlighted the fact that once asbestos has been removed from a building the health concerns caused by the asbestos do not just go away.  A California family in Vacaville is concerned about their health because of asbestos that is being dumped in a nearby landfill.

The family purchased their home before the landfill was opened and according to the article have complained on several occasions to the landfill operators about unpleasant smells.  According to the homeowners these complaints have not been acknowledged which leads them to be even more concerned about the asbestos waste at the landfill.

The company that runs the landfill says the asbestos waste is specially packaged and inspected before being buried separately in an isolated area.  Asbestos from building materials and other waste is heavily regulated.  According to the Environmental Protection Agency’s (EPA), “When asbestos-containing materials are damaged or disturbed by repair, remodeling or demolition activities, microscopic fibers become airborne and can be inhaled into the lungs, where they can cause significant health problems.”  This fact has lead to stringent regulations for its removal and disposal.

LA Testing, an affiliate of EMSL Analytical and a leading provider of environmental testing services, has extensive experience providing asbestos testing solutions to ensure workers and residents are protected.  “Scientific studies have proven that breathing asbestos fibers can lead to an increased risk of lung cancer, mesothelioma and respiratory diseases,” reported Ben Sublasky, National Director of Client Services for LA Testing and EMSL Analytical.   “The Department of Toxic Substances (DTSC) classifies asbestos-containing material as hazardous if it is friable and contains 1% or more of asbestos.  There are specific regulations regarding its disposal to help protect workers, residents and the environment.”

LA Testing and EMSL Analytical are providers of environmental testing services and products to professionals and the general public. The companies have an extensive list of accreditations from leading organizations as well as state and federal regulating bodies.