Time to Storm the Castle? The perfect time to buy

Daniel Horowitz is ready to bargain.

The 55-year-old trial lawyer is trying to sell a four-bedroom villa with marble imported from Italy, a winery and a fruit orchard on 14 acres in Lafayette, Calif. Mr. Horowitz already chopped the price to $3.2 million from $4 million, the amount he estimates having spent on the land and construction. "We thought it would sell right away," he says. But it hasn't, and he is willing to consider lower offers, he says. 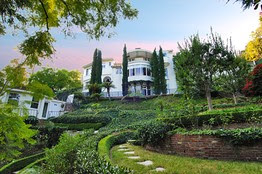 Three years into the housing bust, steep discounts are emerging in the market for high-end homes, which had been the real-estate industry's last redoubt until now. Despite the budding economic recovery, demand for pricey properties is falling as potential buyers struggle to come up with money for big down payments and find it difficult to qualify for large mortgages. With buyers dropping out and homes languishing on the market, sellers are beginning to capitulate, cutting prices to move their properties.

The result: Buyers with lots of cash, or access to it, can find great deals. Not all million-dollar homes are castles, especially in coastal markets. But price drops and relatively small bumps in budget are landing shoppers the kind of amenities—kingly bathrooms, stables, gates—that were once beyond reach. Kenneth Rosen, chairman of the Fisher Center for Real Estate and Urban Economics at the University of California, Berkeley, says it is a "very good time to be a buyer at the high end."

In some markets, houses that are more than twice the size of others are on the market for less than twice the cost. Shaun Rawls, a broker at Keller Williams Realty in Atlanta, points to two homes with similarly desirable locations in that city's wealthy Buckhead district. The smaller home, with 3,060 square feet, is priced at $765,000, or $250 a square foot. The larger home, with 7,612 square feet, has an asking price of $1.2 million, or $158 per square foot.

The million-plus market seems ripe for falling prices. Until now it has been lower-end homes, which saw the sharpest run-up during the boom, that have borne the brunt of the housing bust. Though there aren't national statistics that track the million-dollar market, local markets show that prices for top properties have room to drop. For example, the bottom third of the Los Angeles area market—currently homes under $300,000—has seen prices fall by 52.5% since the market peak in 2006, returning to April 2003 levels, according to the S&P/Case-Shiller indexes. Prices for the top third of the market—currently homes above $510,000—have fallen by 27.3% from the peak, to March 2004 levels. While prices at the bottom of the market gained 5% over the last quarter of 2009 from the previous quarter, high-end home prices dropped 0.5%.

Home sales across the board remain sluggish. Sales of existing homes fell 0.6% last month to a seasonally adjusted rate of 5.02 million units, while new-home sales fell by 2.2% last month to lows last seen in 1963. But the mismatch of supply and demand is now widest in the seven-figure market. In the most coveted Northern Virginia suburbs of Washington, for example, supplies are fairly tight up to about $900,000. But it is a buyer's market between that level and $2 million, says James W. Nellis II of Re/Max Allegiance, a local broker.

That makes for some deep discounts. In Mill Valley, Calif., the price on one four-bedroom home was reduced March 11 to $2 million from $3 million. The house has 2,500 square feet of decks overlooking San Francisco Bay, says the listing agent, Suzy Doyle. On Ranch Gate Road in Chula Vista, Calif., a foreclosed home with six bedrooms is being offered at $675,000. In 2006, when it was new, the home sold for $1.3 million.

Few people consider million-dollar homes cheap, of course. Stretching to buy a big home comes with obvious risks. Prices may be falling, but no one knows where the bottom is. Marc Carpenter, a real-estate agent in San Diego, cautions buyers in that battered market that, "If you buy now, [you should] plan on prices reducing over time."

The biggest deals in housing these days can be found at the high end. WSJ's Nick Timiraos joins the News Hub to explain why sellers are scrambling and buyers are pouncing.

Another potential pitfall is that higher-end houses are much harder to value than lower priced cookie-cutter dwellings. Often, high-end homes are unique, and the prices they fetch may have to do with such intangibles as an ocean view or an address with more snob appeal than those just blocks away. That makes it much harder for buyers to find comparable sales indicative of true market value.

Bargain hunters also need to be realistic. They aren't likely to get a steal on the best-preserved homes in the nation's top neighborhoods—places like Central Park West in Manhattan, Santa Barbara, Calif., or the exclusive parts of Boulder, Colo. Supply is permanently constrained in such areas because there is little room to build. And lots of people with money are eager to move in, so prices are likely to come down only slightly.

The best deals will be on high-end homes that might need work or aren't in the most highly sought-after locations. That leaves plenty of coveted neighborhoods with good schools and amenities to choose from.

Despite the risks, the mortgage market might be suggesting that shoppers buy sooner rather than later. Many forecasters predict that interest rates will rise from today's unusually low levels, in part because the Federal Reserve this month is ending its heavy purchases of mortgage securities. Even if waiting another year might bring lower prices, at least some of that advantage could be wiped out by an interest-rate spike.

Interest rates play a huge role in affordability—and even more so in high-end markets. A $1.2 million home today might require a 25% down payment, says Lou Barnes, a mortgage banker in Boulder. At today's rate of about 5.75% for a 30-year "jumbo" mortgage, that would mean a monthly payment of $5,252. But if rates were to rise to 6.5%, the monthly payment would rise to $5,688. The home's price would have to fall $1.1 million to keep the monthly payment at a comparable $5,215.

On the demand side, the technicalities of the mortgage market are thinning the ranks of million-dollar home buyers more than usual. Most buyers need a mortgage and would much prefer a cheaper, mainstream one backed by Fannie Mae, Freddie Mac or the Federal Housing Administration. But loans that meet the government's criteria can be no larger than $417,000 in most of the U.S.; in higher-cost areas like New York and San Francisco, that limit stretches to $729,750.

Loans above those limits are considered jumbos. While rates on jumbos are way down from a high of about 7.9% in October 2008, they remain well above the 5.1% found on conventional loans guaranteed by Fannie or Freddie, according to HSH Associates. What's more, lenders also require heftier down payments for jumbo loans—in some cases 25% or more of the home's value.

The shrinking pool of potential buyers is giving people of means unusual bargaining power. The inventory of all listed homes in February was enough to last 8.6 months at the current sales rate, according to the National Association of Realtors, a trade group. For those priced above $1 million, the supply was enough to last nearly 32 months.

For these reasons, "this is the perfect time to buy," says Eric Awad, a neurologist in Atlanta who thinks market conditions are forcing sellers of high-end homes to knuckle under. He and his wife, Nachwa Jarkas, an assistant professor at Emory University, are eager to trade up from their town home and buy a four-bedroom house in Atlanta's posh Buckhead district. They are looking in the range of $1 million to $1.2 million, though Dr. Awad hopes to "knock the price down" below $1 million.

Like many potential buyers of high-end homes, the couple has a big hurdle to clear: Before buying, they need to sell their town home, which is on the market for $575,000, and they have no idea how long it will take for them to find a buyer. In this still-troubled real-estate market, success favors buyers who don't have to sell first.