Clark Adler kissed the box filled with his father Steve's ashes before gently letting it sink to the sand at the bottom of the ocean.

Clark Adler, 13, releases flowers during a paddle-out memorial for his dad Steve Adler who died after suffering from an aneurysm at age 40. He sits on his father's board.

Clark said the biggest lesson his father taught him over the years was "how to be a good person."

Many of the hundreds who gathered on the sand at Surfside beach on Sunday would have said Steve Adler was a great example of a good person, a mellow surfer with easygoing ways who always had a smile on his face.

The surfing and SUP community said goodbye to one of their own during a traditional paddle-out ceremony, with more than 350 people who sat or stood on boards offshore, held hands and splashed as memories were shared.

Steve Adler suffered an aneurysm in a vessel near his heart on March 11. He was 40.

"Adler was the most social butterfly you have ever met in your life," said Lyndon Cabellon, a friend for more than 20 years. "He touched so many people. Ask anyone on the beach – he had the biggest smile. He just had the biggest heart."

Steve Alder, who created a surfboard glassing shop when he was just 18, was a fixture in the surf community.

Most recently, he glassed boards for Tim Stamps, and also teamed up with business partner Jodie Nelson to create ......http://www.ocregister.com/articles/adler-244630-steve-clark.html

Posted via web from The Newport Beach Blog 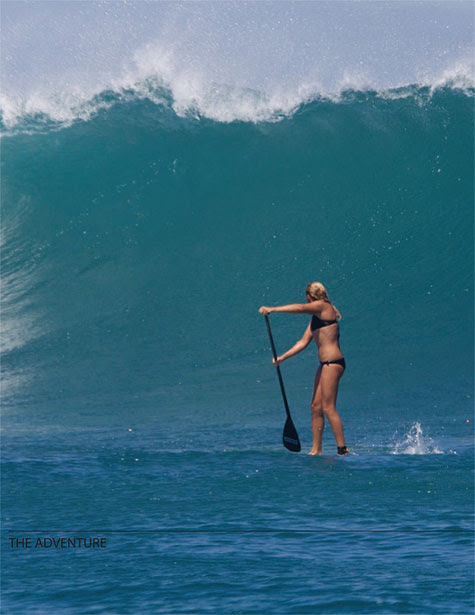 Next week, Morgan Hoesterey (pictured above) and Jenny Kalmbach, both accomplished standup paddleboarders, will begin a three-week attempt to cross Hawaii's nine legendary open-ocean channels as never before.
Their expedition is called Destination 3°, for the three degrees of latitude (19° to 22°) that encompass the entire archipelago. Let us put this feat into perspective:
The Alenuihaha Channel, sandwiched between two volcanoes, is one of the roughest stretches of water in the world and can have 20-foot swells.
Or 65-mile Ka’ie’iewaho Channel may take 24 hours to cross, so they plan to paddle by a full moon. Also avid freedivers and surfers, these ladies' efforts are in the name of cleaning up plastics and other debris from the ocean with Algalita Marine Research Foundation.
We caught up with Hoesterey, a California native who now resides in Honolulu, to clue us in on this quest. We'll hear from Kalmbach mid-expedition.—Mary Anne Potts

Not a bad session, lots of warm air, college kids out of school, NO Waves, but memorable afternoon cruising the jetties!

Get out to the Ocean!

how do I paddle out in surf? #1 question asked me when SUP