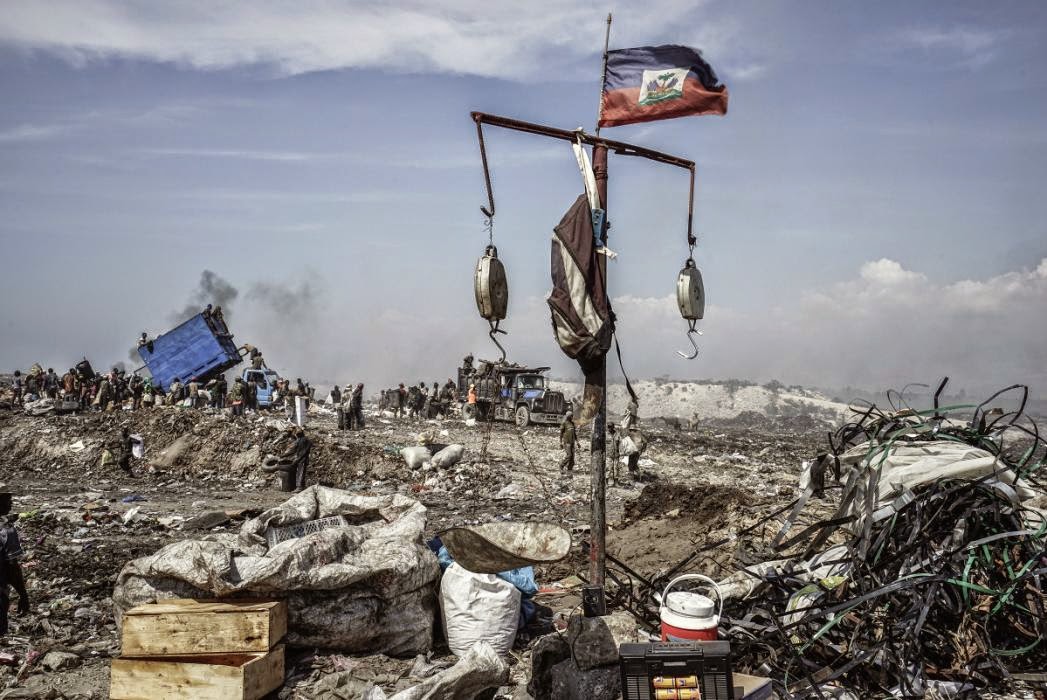 In a 200-acre-plus dump 5 kilometers north of Haiti’s capital, Port-au-Prince, hundreds of men, women and children scavenge day and night through the burning wasteland. They earn $12 to $15 a day — on a good day — for recycling plastics as well as clothing, household items and aluminum (for smelting). Some 5,000 tons of waste is created each day in the Port-au-Prince area.
It is here that the majority of the rubble from the January 2010 earthquake was dumped. The quake killed more than 230,000 people in and around Port-au-Prince.
A few companies have sprung up recently to buy the recycled plastic for 10 to 14 cents per pound.
Most of the dump scavengers have major respiratory and other health issues. The landscape is filled with the smoke from burning rubber, plastics and garbage. Large pigs roam the mountains of trash, feeding off the rotting household waste. They are eventually killed and sold by the internal dump-appointed bosses.
Most alarming is the amount of unregulated medical waste dumped here from city hospitals and clinics. “We don’t know how much or what they dump,” said one of the recyclers.
Ringing the dump, still within the clouds of drifting toxic smoke, are hundreds of corrugated tin shacks, where the workers live and deal in the various recycling side businesses that the dump provides.
Photographing this area was by far one of the more taxing projects I have attempted. Many of the dwellers have fled the city and gang affiliations and do not want to be seen. As the Haitian National Police rarely visit here, it has become a safe haven for some of Port-au-Prince’s more shady characters.
I was given patrol access in the dump over three days in January. Questions to officials were left, for the most part, unanswered, but one thing is clear: Proper incineration and waste disposal is needed, as only 10 percent of the city’s waste is collected by the state.

(Text and Photography by Giles Clarke/Getty Images Reportage)
Find more news-related pictures in our photo galleries and follow us on Tumblr.
at February 01, 2015 No comments: