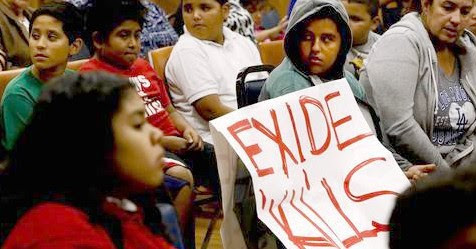 Residents express their outrage during a community meeting hosted by the SCAQMD.

Vernon, CA shares a dubious association with Frisco, TX, Baton Rouge, LA, Atlanta, GA, and perhaps other cities: their soil, air, and water have been contaminated by the battery recycler, Exide Technologies. Vernon, CA is one of many ‘toxic hot spots’ in California and across the nation where homes and schools are one door away from polluting industries.

Exide has operated the facility on South Indiana street since 2000. Since then they’ve built an impressive pollution rap-sheet. Air quality regulators (South Coast Air Quality Management District or SCAQMD) deplored the serial violator as a “higher cancer risk to more people than any of more than 450 facilities the agency has regulated… in the last 25 years.” The consequences are recorded in people’s bodies as residents witness family members and neighbors develop major illness, such as cancer, and children’s development is stunted.

In April, 2013 officials warned that over 110,000 residents were at a heightened cancer risk from the arsenic emanating from the Vernon plant. In March this year soil testing by state officials revealed lead contamination at 80-1000 ppm in areas around Exide. In response, regulators suggested residents wash their hands.
CBE is joining with the community and allies, and we’re doing more than ‘washing our hands.’ CBE organizers, scientists and lawyers have stepped in to end Exide’s lead and arsenic contamination of our communities. Stay tuned as this campaign develops

http://www.cbecal.org/organizing/southern-california/exide/
at October 27, 2014 No comments: