Mesothelioma is a cancer of the lining of the lungs that is usually associated with elderly people and those over a certain age, but the reality is actually a little bit more complicated than that. Although mesothelioma is commonly diagnosed in the elderly, most people with the disease start develop twenty to thirty years before diagnosis. We often take for granted how many people understand the connection between cigarette smoking and lung cancer, but not nearly as many people understand the link between asbestos and mesothelioma.
Asbestos is the commercial name for a group of minerals that became very popular around the 1920s and ‘30s as a building material. It was used in everything from roofing to piping, boilers to window tiles and cement to insulation. Asbestos was ideal because of its resistance to heat and combustion which made it a great protectant to industrial buildings.
At the time of asbestos’ widespread use, the effects and implications of exposure were largely unknown. Mesothelioma is a very slow-progressing disease that gradually infiltrates the body over decades before making its life-threatening presence years later. On average, exposure to asbestos it will take 15 years or longer for symptoms to appear. That means that young adults in their 20s and 30s who are exposed to asbestos today have a significantly greater risk of developing mesothelioma in the future.

So How Does Mesothelioma affect Millennials?

Mesothelioma can affect young adults in many different ways. Generally it affects those who are exposed to asbestos, but it can also affect loved ones such as parents or grandparents who may have previously been exposed when its use was much more widespread.
In the first instance, it's helpful to understand why even as a college or university student mesothelioma may be affecting you right now.
The only known cause of malignant mesothelioma is the inhalation of asbestos into the lungs. After scientists first made this link, the U.S. government took steps to curb and reduce the use of asbestos in building materials. Unfortunately, even today there are millions of buildings and homes ridden with asbestos. Because asbestos can be found in so many building materials (particularly in older buildings), it is not uncommon to hear of schools, college dorms, homes, and workplaces that contain the toxic substance.
So what takes mesothelioma symptoms so long to appear? Asbestos fibers are microscopic, and when disturbed they can stay airborne for long periods of time. When inhaled, the fibers can become embedded deeply in the lung linings, eventually causing inflammation that leads to cancer.
Given that asbestos exists in homes, schools, and workplaces, many young adults are still being exposed to asbestos today. Symptoms of today's exposure won't show up for 20 to 30 years, after it’s too late to prevent disease.
For those taking care of elderly relatives that have been diagnosed with mesothelioma the effects are felt in different ways. Currently, there is no known cure for mesothelioma. Despite incredible advances in recent years, even the most effective treatments have limited effectiveness. Taking care of loved ones throughout this difficult time can be an extremely difficult experience due to this cancer’s aggressive nature.

How Millennials Can Help Stop Mesothelioma

Since 2016, asbestos has been completely banned in more than 50 different countries around the world. Iceland was the first country to ban all types of the mineral in 1983. The entire European Union followed suit and finalized a ban in 2005. The United States is one of the few industrialized and developed nations that has yet to ban asbestos.
Most people are surprised to learn that the U.S. government still hasn't banned asbestos. While the government took the necessary steps to limit its use in the 1970s, asbestos has not been banned entirely. Even today, asbestos is still used in roofing materials, fireproofing materials, and a variety of other consumer products.
By nature, Millennials are innovators and activists that keep themselves educated and informed on social issues. The internet has facilitated the flow of knowledge and allowed people to become better informed about their environment like never before. Millennials are more engaged through social media, blogs, news sites, and other media outlets than any preceding generation. If anyone can spread the information about the dangers of asbestos and convince the world that this toxic substance needs to be banned – it’s Millennials!
Millennials are also an ingenuitive generation. They are entrepreneurial in a way that is changing social structures and challenging the norm. They have the ability to create new products to replace asbestos, as well as pioneer new processes to treat mesothelioma. Through their innovation and enterprise, they could even create a cure for cancer someday – and that would be truly amazing!
at June 25, 2017 No comments:

Large quantities of asbestos and other hazardous waste products were found at a facility just hundreds of feet away from Mountain View High School, officials announced on Thursday.
In a combined effort, the state Department of Toxic Substances Control (DTSC) and the South Coast Air Quality Management District (AQMD) are investigating the illegal waste transport facility where between 600 and 800 bags of asbestos and toxic waste were found.
Titan Environmental Inc. is the company being investigated for the waste violation. It may face penalties of $25,000 for each day that the company operated, says the DTSC.
California law prohibits that any hazardous waste facility be located within 500 feet of any school. 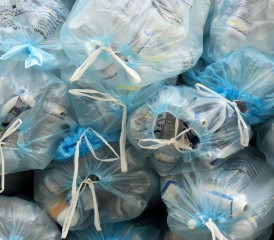 Asbestos removal and transport handled part of the job in Irvine CA.

Asbestos exposure has been known to cause diseases like mesothelioma, lung cancer, asbestosis and other conditions.
Local officials, parents and students learned about the waste violation today via recorded phone message, according to school officials.

The dangers of asbestos have been well understood since the 1960s, but he material was used in various products that were manufactured before then. The waste products located at Titan's facility haven't been specifically identified.
"They were not supposed to be storing waste there. They were operating as a hazardous waste transporter and they did not have the proper permits," said Jeanne Garcia of the DTSC, referring to Titan Environmental Inc.
Air samples were taken by AQMD after the discovery was made in February, but asbestos fibers were not found to be present in the samples.
Titan is located just northwest of the high school's football field and running track. Exposure of the hazardous waste could presumptively occur between areas near the school or in the school, if the toxic materials were not properly packaged.
Asbestos-related diseases like mesothelioma have been known to take up to 50 years to develop after initial exposure. However, because local environmental officials have cited that 'no asbestos is being released,' the nearby community and students are stated to be at no risk of health issues.
Both agencies now have been tasked with developing a plan to properly dispose of the toxic waste.
"We are still in the throes of an investigation," said Garcia.
Officials from both environmental agencies met with school personnel last week to discuss the issue. Superintendent Nick Salerno stated that no students or staff of Mountain View High School have reported feeling sick.
"We are counting on them [DTSC and AQMD] to do a good job. It sounded like they did."
The investigation stems from an anonymous complaint that the DTSC received on February 8 that mentioned Titan. The tip prompted an unannounced inspection on February 11 of the waste transport facility.

Asbestos in Schools: A Bigger Problem

This incident is not the first report of asbestos in or around schools. Cases of potential asbestos exposure have been discovered at schools across the nation, from the elementary to the university level.
In September 2011, a New York City elementary school had to evacuate and relocate 100 kindergarten students after asbestos was found in the school.
In 2008 a Massachusetts high school had to undergo massive asbestos abatement during a reconstruction project. Officials spent a total of $14 million for a demolition, up from the estimated $7.2 million, after asbestos was found throughout various walls in the school.
More recently and more local to Mountain View High School, California State University Northridge was found to have asbestos in 18 different buildings on the campus in January of this year.
The list goes on.
The history of asbestos use in schools dates back to the widespread use of the material in construction products, which was a prevalent during the mid-20th century. Because of its insulating and heat-resistant properties, the toxic material was desirable for integration into walls, piping, flooring, tiling and countless other products.

Mark Hall joined the Mesothelioma Center as a writer in 2011. Prior to joining the content team, Mark graduated from the University of Florida and then spent several years writing about business, entrepreneurship and technology for various online publications.