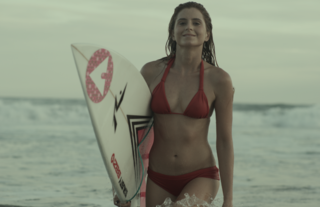 January 20 and 21 saw the biggest waves of the winter to pound Hawaii so far. Those surfers who were skilled enough and brave enough waxed up their big boards and headed to spots like Jaws in Maui, Outer Log Cabins, Oahu, and, of course, the spiritual home of big wave surfing, Waimea Bay. While big-wave surfing has traditionally been a masculine activity, a few women join the lineup those days, including Adventure favorite Maya Gabeira and 23-year-old Anastasia Ashley. Ashley was born on the North Shore and now divides her time between the islands and California. Adventure got a hold of her for a first person account of what it’s like to paddle out and catch a few monsters at such a legendary spot.—Tetsuhiko Endo

ADVENTURE: When did you know you wanted to start riding Waimea?
Anastasia Ashley: I actually didn't start surfing out there 'till last year, when I found an old board under my house that was left by someone—an old 7'10’’ big-wave board. Out of curiosity I wanted to try riding it because I’d never ridden a board that big. I took it out on a small day at Waimea and felt super under gunned, so I then decided I needed a bigger board. I ordered one from Rusty and have been stoked to surf the bay ever since.

What was it like paddling out for the first time?
It was definitely surreal seeing the waves from the water—they’re so big!

How do you mentally prepare yourself for any big swell?
Definitely by just being physically prepared. I always get a good night’s sleep and make sure to eat some healthy food to keep me powered.

Walk me through surfing a wave at Waimea Bay.
Being out at Waimea is pretty crazy. The paddle out is actually pretty minor, besides the initial shore break. but if you mistime that you can be very much screwed. The most intense part, on the other hand, is the drop. It feels like you’re dropping in forever! The wave behaves one way around 15 feet, but it definitely changes once the swells hit the 18-foot plus mark. It jacks up out of the deep water and turns really, really intense.

Maya Gabeira once told me that there is a certain loneliness to being a woman who rides big waves because you are constantly surrounded by men. What is your take on that?
I agree. I feel like that is true in any aspect of surfing, big waves and small waves. It's definitely a man's lineup. But I also think it's definitely changing!

Are you considering doing any more big-wave surfing this year?
Yeah, of course! It's all swell dependent, so I’ll hopefully surf a few more days out at Waimea, and some outer reefs.