For nearly two decades at the Grand Canyon in Arizona, tourists, employees, and children on tours passed by three paint buckets stored in the national park's museum collection building, unaware that they were being exposed to radiation.
Although federal officials learned last year that the 5-gallon containers were brimming with uranium ore and then removed the radioactive specimens, the park's safety director alleges nothing was done to warn park workers or the public that they might have been exposed to unsafe levels of radiation.
"a top management failure" and warned of possible health consequences.

"If you were in the Museum Collections Building (2C) between the year 2000 and June 18, 2018, you were 'exposed' to uranium by OSHA's definition," Stephenson wrote. "The radiation readings, at first blush, exceeds (sic) the Nuclear Regulatory Commission's safe limits. … Identifying who was exposed, and your exposure level, gets tricky and is our next important task."
In a Feb. 11 email to Acting Interior Secretary David Bernhardt and Deputy Inspector General Mary Kendall, Stephenson said he had repeatedly asked National Park executives to inform the public, only to get stonewalled.
Thousands at Grand Canyon National Park were unknowingly exposed to unsafe levels of radiation for nearly two decades. William Flannigan, azcentral
"Respectfully, it was not only immoral not to let Our People know," he added, "but I could not longer risk my (health and safety) certification by letting this go any longer."
According to Stephenson, the uranium specimens had been in a basement at park headquarters for decades and were moved to the museum building when it opened, around 2000.
One of the buckets was so full that its lid would not close.
Stephenson said the containers were stored next to a taxidermy exhibit, where children on tours sometimes stopped for presentations, sitting next to uranium for 30 minutes or more. By his calculation, those children could have received radiation dosages in excess of federal safety standards within three seconds, and adults could have suffered dangerous exposure in less than a half-minute. 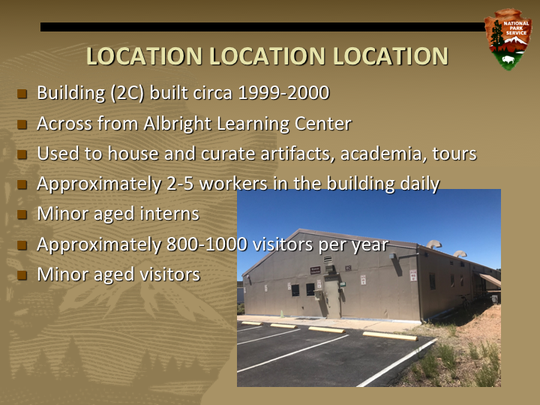 This is part of a 45-slide presentation from the safety manager at the Grand Canyon National Park that documented the radiation exposure and findings. (Photo11: Courtesy of Elston Stephenson)
The Nuclear Regulatory Commission measures radiation contamination in millisieverts per hour or per year. According to Stephenson, close exposures to the uranium buckets could have exposed adults to 400 times the health limit — and children to 4,000 times what is considered safe.
Emily Davis, a public affairs specialist at the Grand Canyon, said the Park Service is coordinating an investigation with the Occupational Safety and Health Administration and the Arizona Department of Health Services.
Davis stressed that a recent review of the building in question uncovered only background radiation, which is natural in the area and is safe.
"There is no current risk to the park employees or public," Davis said. "The building is open. … The information I have is that the rocks were removed, and there's no danger."
Davis declined to address Stephenson's assertion that thousands of people may have been exposed to dangerous levels of radiation, or his allegation that the Park Service violated the law by not issuing a public warning.
"We do take our public and employee safety and allegations seriously," she said. 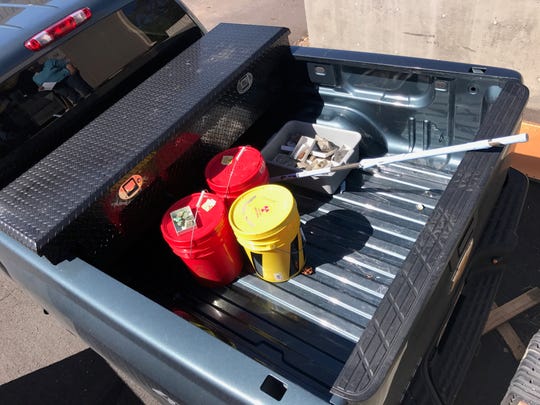 Technicians did not have protective clothing, so they purchased dish-washing and gardening gloves from a general store. They then used a broken mop handle to lift the contaminated buckets into a truck, Stephenson said. (Photo11: Courtesy of Elston Stephenson)
Reached by phone at the South Rim, Stephenson said his only concern is the safety of everyone who spent time in a danger zone, and he alerted them only after failing for eight months to get park officials to act.
"I've never seen anything like this in my life," he said.
Stephenson said the uranium threat was discovered in March 2018 by the teenage son of a park employee who happened to be a Geiger counter enthusiast, and brought a device to the museum collection room.
Workers immediately moved the buckets to another location in the building, he said, but nothing else was done.
A few months later, Stephenson said, he was assisting with a safety audit when employees told him about the uranium. As a former Army helicopter pilot who later worked as a safety manager in the Navy, Stephenson said he knew it was "bad mojo" and instantly called a National Parks specialist in Colorado.
Stephenson said specialists apparently had no Geiger counter, so they drove to Utah to pick up a Ludlum meter, which also measures radiation output. 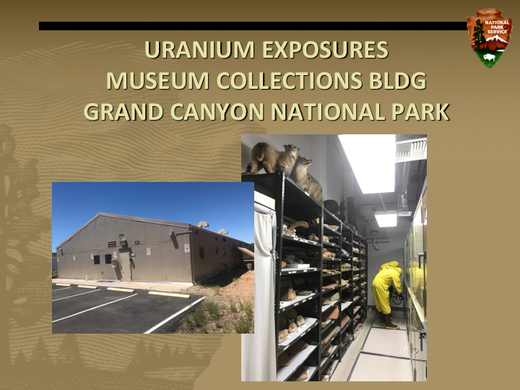 12 Photos
Grand Canyon uranium warning slide show
Next Slide
The technicians reached the Grand Canyon several days after his call, on June 18. Lacking protective clothing, they purchased dish-washing and gardening gloves, then used a broken mop handle to lift the buckets into a truck, Stephenson said.
Those details are corroborated by photographs Stephenson included in a 45-page slideshow created to document the radiation exposure and alleged cover-up.
Stephenson said technicians concealed the radiation readings from him and dumped the ore into Orphan Mine, an old uranium dig that is considered a potential Superfund site below the Rim, about two miles from Grand Canyon Village.
Stephenson said he drove to Phoenix in November and filed a report with OSHA, which sent inspectors to the museum building in yellow protective suits.
Stephenson said they detected a low-level site within the building and traced it to the three buckets, which Park Service technicians had inexplicably returned to the building after dumping their contents.
"You could hear their meters going off," Stephenson said.
Davis, the Park Service spokeswoman, declined comment on those details.
A spokesman for OSHA confirmed an investigation is underway, but declined to provide any other information.

Stephenson, a military veteran who is certified as an occupational safety and health technician, was in a similar controversy during his time in the Navy. According to court records, he began calling for action to prevent falls after a series of accidents in 2016.
As complaints escalated, Stephenson was fired. He turned to the Office of Special Counsel, a federal agency that protects whistleblowers, and his termination was stayed. It is unclear how that case was resolved, but within months, Stephenson had a new job with the National Park Service.
Stephenson said the uranium exposure saga developed while he was pursuing a racial-discrimination complaint with the Equal Employment Opportunity office. Stephenson is African-American. 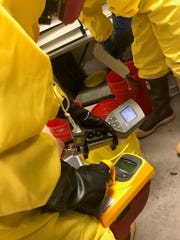 "You could hear their meters going off," Stephenson said about the three buckets in the museum building. (Photo11: Courtesy of Elston Stephenson)
He said high-level officials in the Park Service developed a "secrecy pact" to conceal radiation exposure data despite his insistence that a "Right to Know" law mandates public disclosure.
"My first interest is the safety of the workers and the people," he added.
Stephenson eventually obtained a report submitted by the Park Service's regional safety manager, confirming the area was "positive for radioactivity above background" and showing high levels near the taxidermy area.
The report indicated radiation levels at "13.9 mR/hr" where the buckets were stored, and "800 mR/hr" on contact with the ore. Just 5 feet from the buckets, there was a zero reading. The abbreviation, "mR" typically stands for milliroentgen, a measurement roughly equivalent to a millirem, according to the Nuclear Regulatory Commission.
The NRC says average radiation exposure in the United States from natural sources is 300 millirems per year at sea level, or 400 at high altitude.
The commission lists a maximum safe dosage for the public, beyond natural radiation, is no more than 2 millirems per hour, or 100 per year.
The report's recommendations did not call for public notification, but suggested guidelines for handling and storing geology samples in the future. 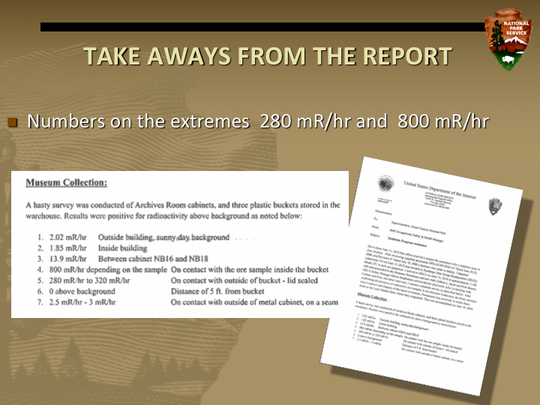 The report warned that there were "beyond natural radiation" levels where the buckets were stored. (Photo11: Courtesy of Elston Stephenson)
Stephenson calculated potential exposures over 1,400 times the NRC's safe level for children, and over 140 times the safe level for adults.
He said he pressed park superintendents to take action, submitted an Inspector General complaint, contacted the FBI, and wrote to every member of Congress.
In his letter to colleagues, Stephenson apologized for the untimely notice. He stressed that exposure may not be severe depending on how close individuals got to the source, how long they were exposed, what they were wearing, and other factors. He also emphasized that employees will not necessarily suffer health consequences, but should consider receiving a medical screening.
"Of particular concern are 1000s of children attending 'shows' in very close proximity to the uranium," he wrote. Those presentations lasted a half hour or more, he said, yet radiation dosages could have exceeded federal safety standards within seconds.
Stephenson said he's heard nothing from superiors at the Park Service since he sent the warning letter.
"They're in cover-up mode," he said. "I've been cut off from any kind of information."
DIG DEEPER