Poisons in the Earth: the legacy of toxic iPhone e-waste

The world is full of electronics -- computers, laptops, cell phones, tablets, e-book readers, et cetera. In fact, according to some estimates, by 2017 the average person will have five devices that connect to the Internet, many of them manufactured by American electronics giants Apple and Microsoft.What's more, as the "Internet of everything" becomes more and more prevalent in the coming decades, we'll all wind up with even more devices. Already, in sum, American households average about 24 electronic devices, according to the Environmental Protection Agency.But what happens to them when we don't need them anymore? Where does your iPhone go when you toss it? How are iPhones -- and all of the other discarded electronics waste -- disposed of?When we discard our computers, office electronic equipment, entertainment device electronics, mobile phones and television sets, it is called "e-waste." According to some estimates, the world already produces some 50 million tons of e-waste a year.Much of this waste winds up in landfill dumps; in the U.S. alone, 70 percent of e-waste winds up in landfills. According to the EPA, about 30 million computers are tossed in the U.S. each year; in Europe, about 100 million cell phones are discarded. Only about one-quarter of e-waste is recycled.What's more, the amount of e-waste is set to explode; as the world becomes more dependent on electronic, Internet-connected devices, millions more tons of this kind of waste will be generated each and every year. The UN's Environment Program estimates that by 2020 e-waste from old computers will have jumped by 200 to 400 percent from 2007 levels, and by 500 percent in India.By that same year in China, e-waste from discarded mobile phones will be about 7 times higher than 2007 levels and, in India, 18 times higher.But a great deal of e-waste winds up in incinerators, and that's a big problem for the environment and your health. That's because of the hazardous heavy metals -- many of them rare earth metals -- that are contained in every device."Electronic waste isn't just waste -- it contains some very toxic substances, such as mercury, lead, cadmium, arsenic, beryllium and brominated flame retardants," says the group e-Stewards, on its website. "When the latter are burned at low temperatures, they create additional toxins, such as halogenated dioxins and furans -- some of the most toxic substances known to humankind. The toxic materials in electronics can cause cancer, reproductive disorders, endocrine disruption, and many other health problems if this waste stream is not properly managed. Many of the toxic constituents are elements, which means they never disappear, even though they may change form."The poisoning of AsiaA number of additional toxic elements in electronic devices don't break down over time; rather, they accumulate in the food chain and biosphere. These toxins present a risk to communities as well as the global ecosystem, and also to those who recycle electronics around the world.e-Stewards reports that an estimated 70-80 percent of e-waste that is given to recyclers is exported, and then mostly to countries with developing economies and inappropriate technology to handle it adequately and safely -- a way of externalizing the real costs of managing such products. Open-air burning is frequent in these countries, as are riverside acid baths which are used to extract a few of the rarest materials. The remaining toxin materials are dumped, most often.Most of the e-waste goes to China, India and Pakistan, with China being the largest dump site of the three countries. Some African countries like Ghana also deal with e-waste through incineration.In a report titled "Exporting Harm: The High-Tech Trashing of Asia," prepared by the Basal Action Network and Silicon Valley Toxics Coalition, in conjunction with Greenpeace China, Pakistan's SCOPE, and Toxics Link India, noted that e-waste was the most rapidly growing waste problem in the world -- and that Asia was paying the heaviest toll:Rather than having to face the problem squarely, the United States and other rich economies that use most of the world's electronic products and generate most of the E-Waste, have made use of a convenient, and until now, hidden escape valve -- exporting the E-waste crisis to the developing countries of Asia.

Yet trade in E-waste is an export of real harm to the poor communities of Asia. The open burning, acid baths and toxic dumping pour pollution into the land, air and water and exposes the men, women and children of Asia's poorer peoples to poison. The health and economic costs of this trade are vast and, due to export, are not born by the western consumers nor the waste brokers who benefit from the trade.

The export of E-waste remains a dirty little secret of the high-tech revolution.Children being affected too oftenMeanwhile, in Ghana, Greenpeace International says that samples taken from just two toxic e-waste burn sites there "revealed severe contamination with hazardous chemicals.""In the yards, unprotected workers, many of them children, dismantle computers and TVs with little more then stones in search of metals that can be sold. The remaining plastic, cables and casing is either burnt or simply dumped," the organization said in a report posted online. "Some of the samples contained toxic metals including lead in quantities as much as one hundred times above background levels."Says Greenpeace scientist Dr. Kevin Bridgen, who has visited toxic e-waste burn sites in China, India and Ghana: "Many of the chemicals released are highly toxic, some may affect children's developing reproductive systems, while others can affect brain development and the nervous system. In Ghana, China and India, workers, many of them children, may be substantially exposed to these hazardous chemicals." 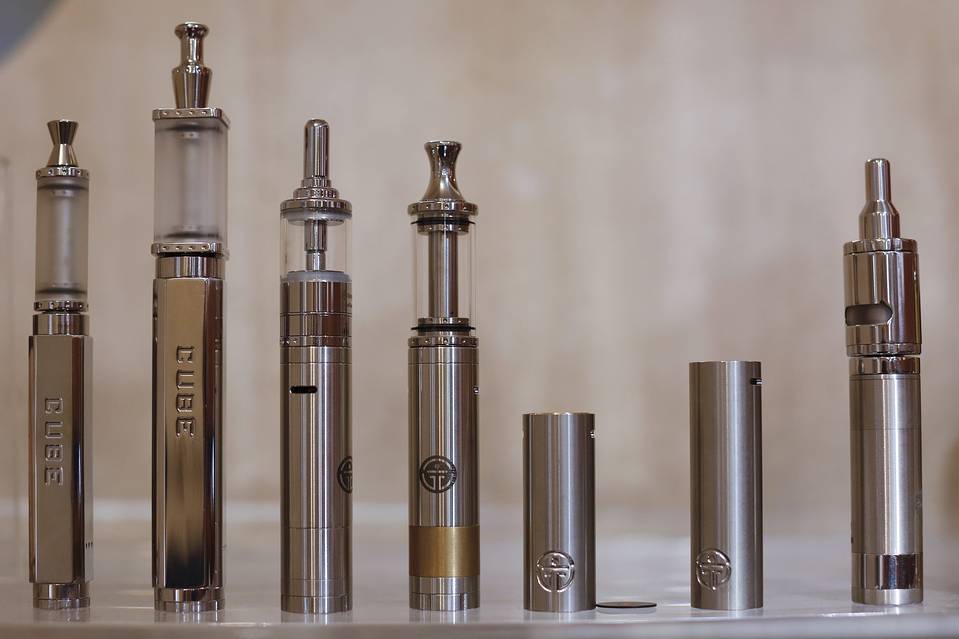 ENLARGE
The Food and Drug Administration is expected to complete its April 2014 rules regulating e-cigarettes within the next two months. PHOTO: TONY GENTILE/REUTERS

A proposal introduced on Tuesday by the Food and Drug Administration could result in warning labels and child-resistant packaging on bottles of liquid nicotine used in electronic cigarettes.
It is the first regulatory action on e-cigarettes the U.S. agency has announced since proposing regulations in April 2014 that would allow it to assume oversight of the $3.5 billion industry. The FDA is expected to complete those rules within the next two months. As part of the rules, it is also expected to restrict sales of battery-powered devices to anyone under 18 years old and require manufacturers to submit their products for federal approval.
The agency said on Tuesday that it would seek public comment for 60 days about whether bottles of liquid nicotine should require warning labels and childproof packaging in light of a recent increase in nicotine exposure and poisoning incidents. A January report by the California Department of Public Health said that reports of e-cigarette-related nicotine poisonings in young children in the state of California rose to 154 in 2014 from seven cases in 2012.
The FDA will weigh those comments before potentially proposing a rule and the agency would then take additional public comments before a rule is issued. By soliciting comments before it has oversight of the industry, the FDA is setting itself up to shorten the time it takes to complete a rule, which can take more than a year.
Federal and state lawmakers have urged the FDA this year to accelerate its push to regulate e-cigarettes. They have expressed alarm about nicotine poisonings and a report by the federal Centers for Disease Control and Prevention in April that e-cigarette use among teenagers tripled between 2013 and 2014. 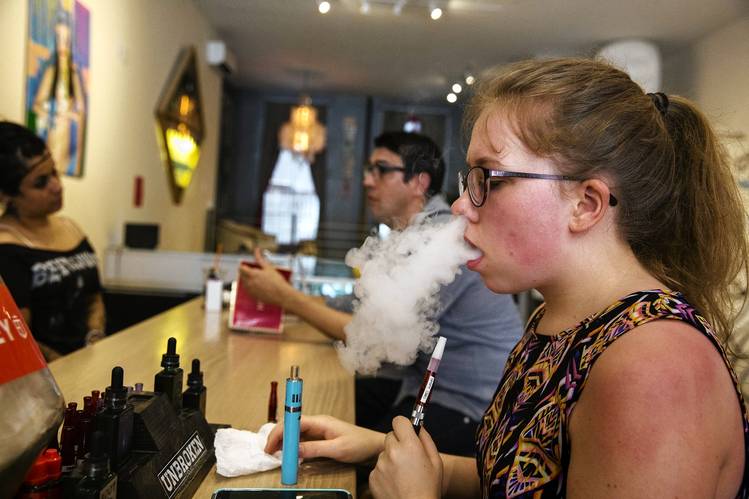 ENLARGE
The FDA will weigh comments on its proposal to put warning labels on liquid nicotine used in e-cigarettes before potentially proposing a rule. PHOTO: LUCAS JACKSON/REUTERS
In the absence of federal regulations, many states and cities have pushed forward with their own rules. More than 40 states have banned e-cigarette sales to minors and more than 100 cities have banned e-cigarette use indoors.
The FDA said earlier this year that it needed time to complete rules because e-cigarettes involve “complicated rule making.” The agency gained regulatory authority over cigarettes through the 2009 Family Smoking Prevention and Tobacco Control Act, but the act didn’t cover e-cigarettes and liquid nicotine products because they were just being introduced to the market.
The e-cigarette industry isn’t opposed to child-resistant packaging or warning labels, but e-cigarette advocates criticized the timing of the proposal because it came before the FDA has taken oversight of the industry.

RE-cigarette advocates oppose the FDA treating e-cigarettes as tobacco products because they say e-cigarettes don’t contain tobacco leaf and they believe e-cigarettes can be used to help smokers quit cigarettes.

“This seems premature,” said Gregory Conley, president of the American Vaping Association, an industry funded advocacy group. “There are still numerous problems the FDA should be working out with their proposed regulations from last year before they contemplate new regulatory actions.”
Write to Tripp Mickle at Tripp.Mickle@wsj.com
at October 31, 2016 No comments: