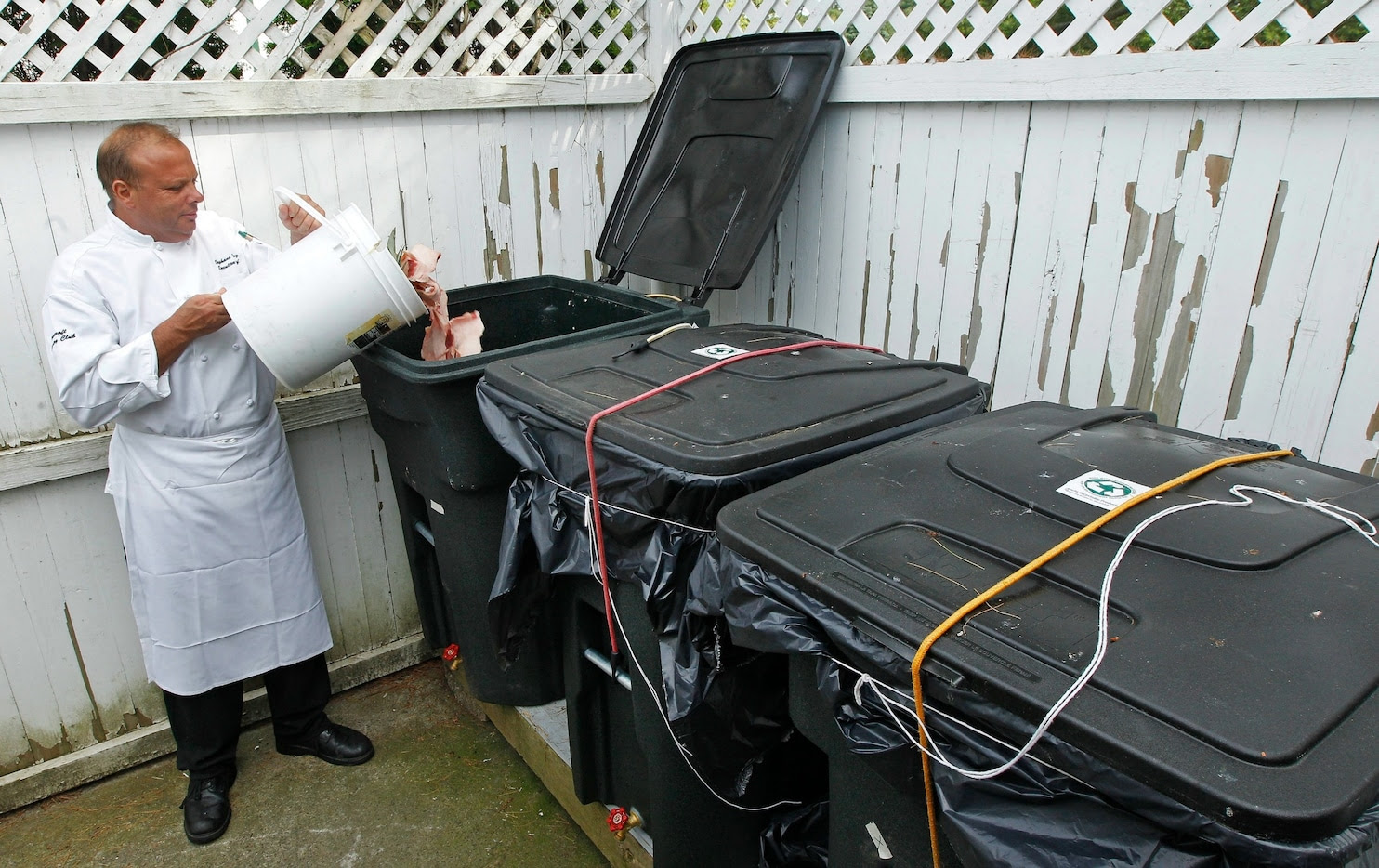 Food waste is a big, and still growing, problem. (Charles Krupa/AP Photo)
The much-anticipated U.N. Climate Summit, which began today in New York, is ostensibly a platform for world leaders to leap frog debates over whether climate change is real, and skip straight to discussions centered around how to overcome the challenges it poses. But it's also an impetus for those beyond the sessions' panels to illuminate troubling patterns of behavior that are contributing to our collective carbon footprint--and food waste is without question one of the most egregious, especially in the United States.
In 2012, the most recent year for which estimates are available, Americans threw out roughly 35 million tons of food, according to the Environmental Protection Agency. That's almost 20 percent more food than the United States tossed out in 2000, 50 percent more than in 1990, and nearly three times what Americans discarded in 1960, when the country threw out a now seemingly paltry 12.2 million tons. 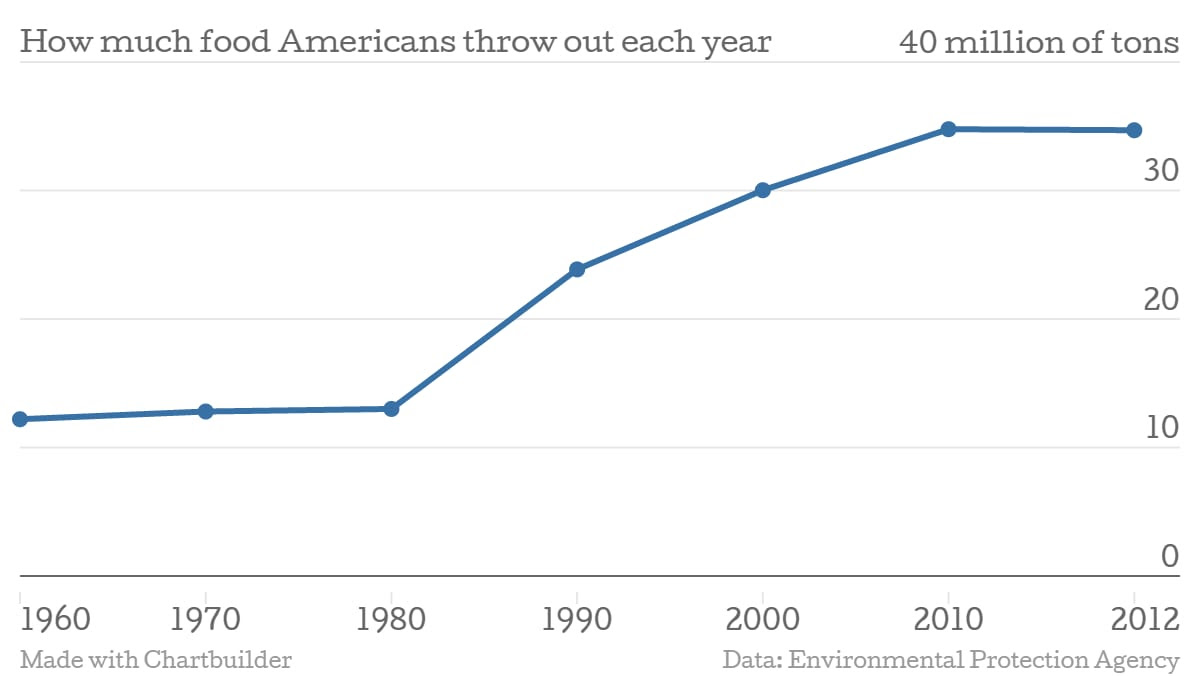 In 1980, food waste accounted for less than 10 percent of total waste; today, it makes up well over a fifth of the country's garbage. Americans, as it is, now throw out more food than plastic, paper, metal, or glass—and by a long shot.

"Food waste is an incredible and absurd issue for the world today," Jose Lopez, Nestle's head of operations said of the issue earlier this month.
Roughly a third of the food produced worldwide never gets eaten. The problem is particularly egregious in developed countries, where food is seen as being more expendable than it is elsewhere. "Every year, consumers in rich countries waste almost as much food (222 million tonnes) as the entire net food production of sub-Saharan Africa (230 million tonnes)," the U.N. notes on its website.
This country is one of the worst offenders: a 2012 paper by the Natural Resources Defense Council estimated that as much as 40 percent of America's food supply ends up in a dumpster.
The most obvious problem with this waste is that while Americans are throwing out their food, an estimated one in every nine people in the world still suffers from chronic hunger—that is, insufficient food—including more than 200 million in Sub-Saharan Africa and more than 500 million Asia. Even in the United States, where that number is significantly lower, some 14 percent of U.S. households still struggled to put food on the table for a portion of last year, according to the USDA.
The level of food waste suggests that curbing hunger isn't a matter of producing more food so much as better preserving and distributing the food currently being produced. As the United Nations noted in its report on world hunger last week, there is actually enough food to feed all seven billion people living in the world today
But there's another less apparent problem with food waste: the threat to the environment. Landfills full of decomposing food release methane, which is said to be at least 20 times more lethal a greenhouse gas than carbon dioxide. And America's landfills are full of food—organic waste is the second largest contributor to the country's landfills. Those same landfills are the single largest producer of methane emissions in the United States—they produce almost a quarter of the country's total methane emissions, according to the NRDC.
The environmental cost of food waste goes further than just methane emissions. Producing food is a costly affair for the environment—an estimated one third of global carbon emissions come from agriculture—but it's one society pays to feed itself.
The price for producing food that never ends up in someone's mouth is much more—it includes both the resources and environmental decay sacrificed for its making. The livestock industry contributes more than 15 percent of global carbon emissions, according to the U.N, which means that when Americans throw out meat, they are wasting some of the most environmentally costly food available.

A number of initiatives, both domestic and international, have surfaced to curb the amount of food that never makes it to people's plates. The FAO's Save Food program centers around four pillars—awareness, collaboration, policy development, and investment—and focuses on the need for improved food channels; the USDA, for its part, has hosted a number of talks, panels, and initiatives. The department is holding a webinar on Wednesday that will specifically address food waste at supermarkets, restaurants, and other food establishments. There are also many localized examples of programs working to diminish food waste, including D.C. Central Kitchen in Washington D.C., which repurposes roughly a million pounds of recovered food each year.
Significantly curbing food waste nationally, let alone internationally, however, will likely prove a daunting task. The problem, after all, is a systemic one. "Our best estimates are that about 40-50 percent of food waste comes from consumers and 50-60 percent from businesses," Ashley Zanolli, who addresses food waste at the EPA, told NPR on Monday. Food is wasted at virtually every stage of its production, which means that it's up to food producers, distributors, retailers, and eaters to fix the problem. 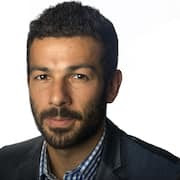 Roberto A. Ferdman is a reporter for Wonkblog covering food, economics, immigration and other things. He was previously a staff writer at Quartz.
at February 17, 2015 No comments: