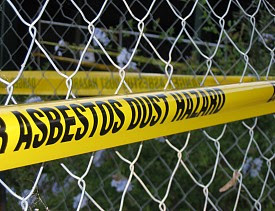 Jayphen/stock.xchng
No one would consider using a material that contains asbestos today, but back in the 1930’s to the 1970’s it was considered practical due to its great fire resistance and fibrous strength characteristics. Roofing and siding are some of the most common materials from that era that contain asbestos.

If it is not “broken,” don’t fix it.
The mantra for most asbestos-containing materials is to leave it alone.  The asbestos is normally sealed in the matrix of the component, and therefore contained does not pose a health risk.  Only when the material is disturbed does it become a problem. DIY Resource: http://www.networx.com/article/roofing-asbestos-removal-costs
When dealing with a product that needs repair or maintenance, there are two primary paths to take, repair and removal. The first and simplest path is the repair route.  Sealing or covering can accomplish this. Sealing (encapsulation) involves treating the material with a sealant that either binds the asbestos fibers together or coats the material so that the asbestos fibers are not released. Covering (enclosure) involves placing something over or around the material that contains asbestos to prevent the release of the fibers. Removing asbestos is the more costly option and unless required by state or local regulations, should be the last option considered in most situations.
How much is this going to cost?
Cost will vary by region and often include the needed preparation work, the removal phase, and the regulated disposal phase.  Since this tends to be a costly project, ensuring that you actually have asbestos is the first step.  This is normally done with samples and testing.  On-site testing can run from $250 to $1000 with additional costs for “real time” air quality monitoring. These monitoring costs can also be in the $500 to $1000 range. A sample can also be sent to testing facilities for analysis at a lower cost.  Once removal is slated, some contractors will “prep” the area using HEPA vacuums.  This cost can run about $40 a sq. foot.  With the actual removal cost at $15 to $25 a sq. ft.  Encapsulation, by comparison, can range from about $3.00 a sq. ft to $6.00 a sq. ft. DIY Resource: http://www.hometalk.com
Who can do the work?
While some regulations allow single family homeowners to undertake this type of project on their own, most regulations require a licensed contractor for this type of work. It is required for projects that involve public buildings, like schools, or structures that contain 4 or more residences. Hire a team that is versed in the complex nature of dealing with this potentially hazardous material.  Local regulations can vary widely, and these are often based on city, county or state requirements.   A specialist that performs these abatements for a living should be vary familiar with the local regulations and all of the special requirements for a safe and productive process.
Kevin Stevens is a Hometalk.com writer.  Read more articles like this one or get help with your home project on Hometalk.com.
at January 20, 2015 No comments:

Contractor Gets Prison in Asbestos Case

A Glendale man convicted of illegally burying asbestos in Canyon Country was sentenced Tuesday to two years in state prison, which the prosecutor called an unusually stiff sentence for an environmental crime.
"I really have only heard of four or five other cases where we, state prosecutors, obtained a state prison sentence," said Deputy Dist. Atty. Robert Brodney, who has five years experience in his office's environmental crimes division.
Wesley Mitchell Burnett, 33, was found guilty in April of three felony counts of dumping the hazardous waste at a site called Crocker Ranch. San Fernando Superior Court Judge William McLaughlin passed sentence and ordered Burnett, who was free on bail, into custody. He also fined Burnett $21,000.
Burnett owned Cal Coast Construction, a Canyon Country company that handled asbestos removal, primarily at government-owned buildings, Brodney said.
A jury convicted Burnett of transporting and illegally dumping asbestos at the site near Warmuth Road and Rolling Hills Avenue on two occasions in 1986. The waste was buried by employees of his firm, and was not uncovered until soil used to cover about 350 bags of the hazardous material began to erode, Brodney said.
at January 20, 2015 No comments:

Email ThisBlogThis!Share to TwitterShare to FacebookShare to Pinterest
Labels: asbestos and danger of exposure

IIASA-IFPRI Global Cropland Map
The first map shows global cropland percentages at 1 kilometer resolution for the year 2005. It was developed by the International Institute for Applied Systems Analysis (IIASA) and the International Food Policy Research Institute (IFPRI) using a hybridization of multiple data sources contributed by many other institutes and organizations, combined with crowdsourcing validation data where volunteers used high-resolution data to check the accuracy of larger-scale maps.
"Current sources of information on cropland extent are not accurate enough for most applications," says IIASA researcher Steffen Fritz, who led the project. "The global cropland map is a low cost solution to fill this need."
IIASA researcher and co-author Linda See adds, "Our hybrid approach combines existing maps to produce a better integrated product than any of the individual global base maps currently available."
The new global cropland map is more accurate, by virtue of increased agreement between different datasets on cropland cover. The researchers used a likelihood method to quantify the level of uncertainty, using agreement between maps to assign a likelihood to each area. See explains, "Where all maps agree there is cropland, there is a higher likelihood that cropland is present." The map improves an earlier hybrid map first released in 2011 by IIASA.
"Getting an accurate crop map is particularly difficult in developing countries, where smallholder plots are tough to differentiate from the surrounding vegetation," said Liangzhi You, a senior research fellow at IFPRI. "Yet cropland information is fundamental to both policymakers and donors so that they can better target their agricultural and rural development policies and investments."
Global Field Size Map
The study also presents the first ever global field size map--an important proxy for mechanization and human development. This map was based entirely on crowdsourced data collected through IIASA's Geo-Wiki project, a crowdsourcing initiative that relies on a global network of citizen scientists, who have looked at thousands of high-resolution images of land cover to determine whether cropland was present or not.
See says, "The field size map is really unique--no such global product currently exists."
The researchers say that the new maps show the power of crowdsourcing for massive data analysis projects. Last year, Fritz won a Consolidator Grant from the European Research Council to continue and expand this work. He and colleagues are now working to expand the field size mapping activities in collaboration with Sokoine University of Agriculture in Tanzania.
Fritz says, "Crowdsourcing has incredible potential for gathering this type of information, and it could be particularly valuable in Africa, where future food security is a major uncertainty."
Both maps are available for exploration and download via IIASA's Geo-Wiki Web site: http://geo-wiki.org/Security/login?BackURL=%2FApplication%2Findex.php (registration required)
Story Source:
The above story is based on materials provided by International Institute for Applied Systems Analysis. Note: Materials may be edited for content and length.
Journal Reference:
at January 18, 2015 No comments: