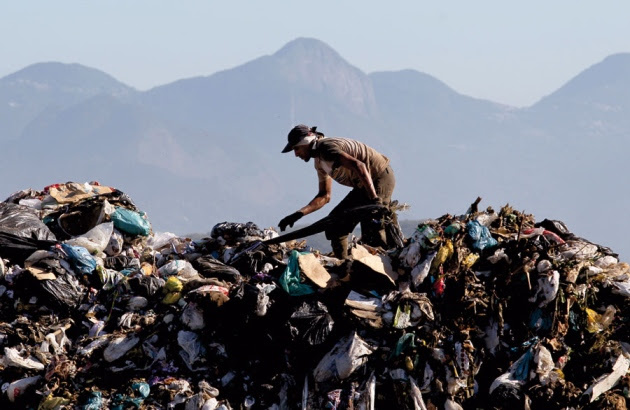 The now-full Jardim Gramacho landfill in Rio de Janeiro, Brazil, received more than 10,000 tonnes of waste per day.
Solid waste — the stuff we send down our chutes, discard at work and put on the curb every week — is a striking by-product of civilization. The average person in the United States throws away their body weight in rubbish every month. When waste management works well, we give it little thought: out of sight and, usually, quickly out of mind. Discarded materials are collected, some are recycled or composted, and most are landfilled or incinerated. But the global view is troubling.

In the past century, as the world's population has grown and become more urban and affluent, waste production has risen tenfold. By 2025 it will double again1. Rubbish is being generated faster than other environmental pollutants, including greenhouse gases. Plastic clogs the world's oceans and rivers, causing flooding in developing-world cities. Solid-waste management is one of the greatest costs to municipal budgets.
The waste problem is acute in emerging cities. Landfills such as Laogang in Shanghai, China; Sudokwon in Seoul; the now-full Jardim Gramacho in Rio de Janeiro, Brazil; and Bordo Poniente in Mexico City vie for the title of the world's largest. Each typically receives more than 10,000 tonnes of waste per day. Rapidly developing cities such as Shenzhen in China are adding to the world's 2,000-plus inventory of waste incinerators. With the largest able to process more than 5,000 tonnes per day, concerns over ash disposal, air pollution and costs are rising too.
As city dwellers become richer, the amount of waste they produce reaches a limit. Wealthy societies tend to curb their waste. So as living standards around the world rise and urban populations stabilize, global solid-waste generation will peak.
Just when is difficult to predict. But by extending current socio-economic trends to 2100, we project that 'peak waste' will not occur this century. Unless we reduce population growth and material consumption rates, the planet will have to bear an increasing waste burden.

Solid waste is mostly an urban phenomenon. In rural communities there are fewer packaged products, less food waste and less manufacturing. A city resident generates twice as much waste as their rural counterpart of the same affluence. If we account for the fact that urban citizens are usually richer, they generate four times as much.

As urbanization increases, global solid-waste generation is accelerating. In 1900, the world had 220 million urban residents (13% of the population). They produced fewer than 300,000 tonnes of rubbish (such as broken household items, ash, food waste and packaging) per day. By 2000, the 2.9 billion people living in cities (49% of the world's population) were creating more than 3 million tonnes of solid waste per day. By 2025 it will be twice that — enough to fill a line of rubbish trucks 5,000 kilometres long every day.
Together, the member countries of the Organisation for Economic Co-operation and Development (OECD) are the largest waste generators, producing around 1.75 million tonnes per day. This volume is expected to increase until 2050, owing to urban population growth, and then to slowly decline, as advances in material science and technology make products smaller, lighter and more resource efficient.
Some countries generate more waste than others. Japan issues about one-third less rubbish per person than the United States, despite having roughly the same gross domestic product (GDP) per capita. This is because of higher-density living, higher prices for a larger share of imports and cultural norms. Waste quantities worldwide can also vary seasonally, by up to 30%, as horticultural and food wastes fluctuate. For example, household waste volumes double in the week after Christmas in Canada.
Waste reduction and dematerialization efforts in OECD countries are countered by trends in east Asia, particularly in China. China's solid-waste generation is expected to increase from 520,550 tonnes per day in 2005 to 1.4 million tonnes per day in 2025. East Asia is now the world's fastest growing region for waste, a distinction that is likely to shift to south Asia (mainly India) in 2025, and then to sub-Saharan Africa around 2050.
As a country becomes richer, the composition of its waste changes. With more money comes more packaging, imports, electronic waste and broken toys and appliances. The wealth of a country can readily be measured, for example, by how many mobile phones it discards. Solid waste can thus be used as a proxy for the environmental impact of urbanization. Most of a material's impact is through production and use. Less than 5% stems from waste management, which includes emissions from collection trucks, landfills and incinerators.

The rate at which solid-waste generation will rise depends on expected urban population and living standards growth and human responses. In 2012, two of us (D.H. and P.B.-T.) authored a World Bank report, What a Waste1, which estimated that global solid-waste generation would rise from more than 3.5 million tonnes per day in 2010 to more than 6 million tonnes per day in 2025. These values are relatively robust, because urban populations and per capita GDP can be well forecast for several decades. 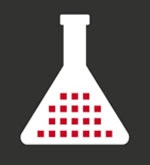 Nature special: Science and the city
Extending those projections to 2100 for a range of published population and GDP scenarios shows that global 'peak waste' will not happen this century if current trends continue (see 'When will waste peak?'). Although OECD countries will peak by 2050 and Asia–Pacific countries by 2075, waste will continue to rise in the fast-growing cities of sub-Saharan Africa. The urbanization trajectory of Africa will be the main determinant of the date and intensity of global peak waste2.
Using 'business-as-usual' projections, we predict that, by 2100, solid-waste generation rates will exceed 11 million tonnes per day — more than three times today's rate. With lower populations, denser, more resource-efficient cities and less consumption (along with higher affluence), the peak could come forward to 2075 and reduce in intensity by more than 25%. This would save around 2.6 million tonnes per day.

How can today's situation be improved? Much can be done locally to reduce waste. Some countries and cities are leading the way. San Francisco in California has a goal of 'zero waste' (100% waste diversion by reduction and recycling) by 2020; already more than 55% of its waste is recycled or reused. The Japanese city of Kawasaki has improved its industrial processes to divert 565,000 tonnes of potential waste per year — more than all the municipal waste the city now handles. The exchange and reuse of materials connects steel, cement, chemical and paper firms into an industrial ecosystem3.

“Waste will continue to rise in the fast-growing cities of sub-Saharan Africa.”

North America and Europe have tried disposal fees, and found that as fees increase, waste generation decreases. Another tactic is to steer people to buy less with their increased wealth, and to spend more on experiential activities that require fewer resources4, 5.
But greater attention to consumption and improvement in waste management is needed in rapidly urbanizing regions in developing countries, especially in Africa. Through increased education, equality and targeted economic development, as in the sustainability scenario we evaluated6 (SSP1), the global population could stabilize below 8 billion by 2075, and urban populations shortly thereafter. Such a path reflects a move towards a society with greater urban density and less overall material consumption7. Also needed is a widespread application of 'industrial ecology' — designing industrial and urban systems to conserve materials. This begins with studies8 of the urban metabolism — material and energy flows in cities.
Reducing food and horticultural waste is important — these waste components are expected to remain large. Construction and demolition also contribute a large fraction by mass to the waste stream; therefore, building strategies that maximize the use of existing materials in new construction would yield significant results.
The planet is already straining from the impacts of today's waste, and we are on a path to more than triple quantities. Through a move towards stable or declining populations, denser and better-managed cities consuming fewer resources, and greater equity and use of technology, we can bring peak waste forward and down. The environmental, economic and social benefits would be enormous.

Fluorescent Lamps and Tubes Should Be Recycled

All fluorescent lamps and tubes are considered hazardous waste in California when they are discarded because they contain mercury. (Title 22, division 4.5, chapter 11, section 66261.50) This includes:

http://www.calrecycle.ca.gov/reducewaste/fluoreslamps/#AllLampsHaz
at July 15, 2014 No comments:

The Incredible shot was taken by Sonja Prost 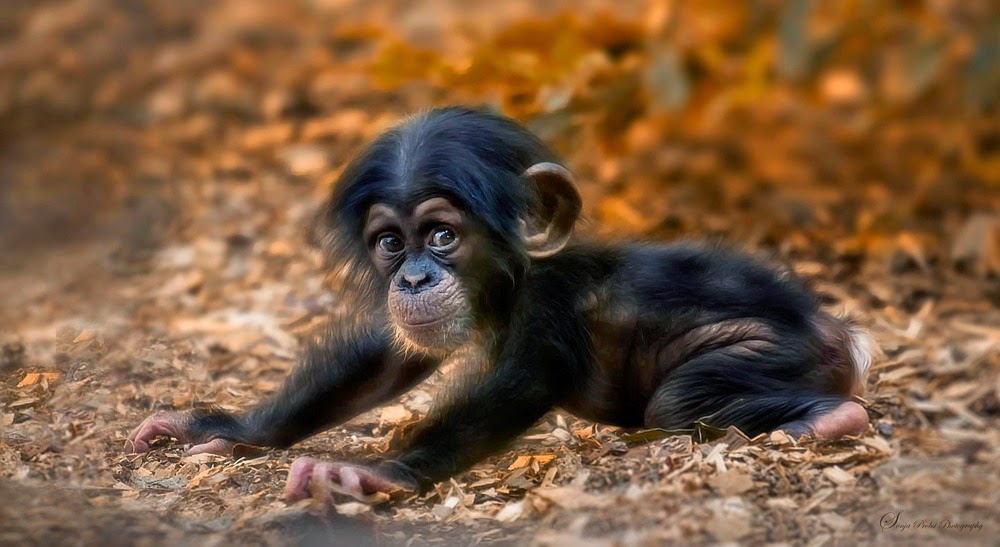 As Many As 70 Million Chinese live in caves

A teacher in China prepares dinner in the cave he calls home, near Ziyun in the country's southern Guizhou province.
Tens of million in China have gone underground — to live.
Over 30 million Chinese make their homes in caves, according to a recent report by the Los Angeles Times.
Reporting from Yanan, China, the newspaper details the varieties of cave dwellers’ experiences.
Many live in Shaanxi province, where the region’s porous soil is particularly well-suited for easy digging.
The caves, called yaodong in Chinese, are usually dug into the side of a mountain. Often rice paper or blankets hang from semicircular entrances to serve as makeshift doors.
Swankier caves have several chambers and are secured with brick masonry. Some even have electricity and running water, the newspaper reported.
“Most aren’t so fancy, but I’ve seen some really beautiful caves: high ceilings and spacious with a nice yard out front where you can exercise and sit in the sun,” said Ren Shouhua, who grew up in a cave in Yanan.  Shouhua, 46, told the Times that he moved from the cave into a concrete-block house when he got a job in the city of Xian in his 20s, but plans to return to his life as a cave dweller after retirement.
“It’s cool in the summer and warm in the winter,” he explained. “When I get old, I’d like to go back to my roots.”
A basic one-bedroom cave without plumbing rents for about $30 a month. A cave with three bedrooms and a bathroom might sell for $46,000, the Times reported.  But according to one local, many people aren’t giving up their spaces.
“A lot of people come here looking to rent our caves, but nobody wants to move out,” said Chen Wei, a 43-year-old Communist Party official who lives in a cave near Yanan.

“It’s like living in a villa,” Wei said. “Caves in our village are as comfortable as posh apartments in the city.”
Architects understand why the lifestyle can be attractive.
“It’s energy efficient,” said Liu Jiaping, director of the Green Architecture Research Center in Xian.

“The farmers can save their arable land for planting if they build their houses in the slope,” Jiaping said. “It doesn’t take much money or skill to build.
“Then again, it doesn’t suit modern complicated lifestyles very well. People want to have a fridge, washing machine, television.”
That might not matter to China’s cave dwellers, many of whom revel in a simple, affordable lifestyle.
“Life is easy and comfortable here,” said Ma Liangshui, 76, who lives in a one-room cave south of Yanan. He has a bed, a fire pit for cooking, and electricity to fuel a single light bulb.
“I’ve lived all my life in caves, and I can’t imagine anything different.”rmurray@nydailynews.com