managing Asbestos waste, Friable and non friable, in your home

Asbestos was once called a miracle material because of its toughness and fire-resistant properties. It was used as insulation, incorporated into cement and even woven into firemen's protective clothing. Over time, however, scientists pinned the cause of lung cancers such as mesothelioma on asbestos fiber inhalation. Asbestos was banned in the many industrialized countries in the 1980s, but the threat lingers on in the ceilings, walls and floors of old buildings and homes. Now a team of researchers from the University of Hertfordshire in the U.K. has developed and tested the first portable, real-time airborne asbestos detector. They hope that the prototype, described in a paper published today in the Optical Society's (OSA) open-access journal Optics Express, will be commercialized in the U.K. in the next few years, providing roofers, plumbers, electricians and other workers in commercial and residential buildings with an affordable way to quickly identify if they have inadvertently disturbed asbestos fibers into the air.

"Many thousands of people around the world have died from asbestos fiber inhalation," says Paul Kaye, a member of the team that developed the new detection method at the University of Hertfordshire's School of Physics, Astronomy and Mathematics. "Even today, long after asbestos use was banned in most Western countries, there are many people who become exposed to asbestos that was used in buildings decades earlier, and these people too are dying from that exposure."

Currently, the most common way to identify hazardous airborne asbestos at worksites is to filter the air, count the number of fibers that are caught, and later analyze the fibers with X-ray technology to determine if they are asbestos. The approach requires expensive lab work and hours of wait time. An alternative method to evaluate work site safety is to use a real-time fiber detector, but the current, commercially available detectors are unable to distinguish between asbestos and other less dangerous fibers such as mineral wool, gypsum and glass. The University of Hertfordshire team's new detection method, in contrast, can identify asbestos on-site. It does so by employing a laser-based technique that takes advantage of a unique magnetic property of the mineral.

When exposed to a magnetic field, asbestos fibers orient themselves to align with the field. The property is virtually unique among fibrous materials. "Asbestos has a complex crystalline structure containing several metals including silicon, magnesium and iron. It is thought that it is the iron atoms that give rise to the magnetic properties, but the exact mechanism is still somewhat unclear," says Kaye. Kaye notes that his team wasn't the first to try to exploit the magnetic effect to develop an asbestos detector. "Pioneering U.S.-based scientist Pedro Lilienfeld filed a patent on a related approach in 1988, but it seems it was not taken forward, possibly because of technical difficulties," he says.

The Hertfordshire team's new detection method, developed under the European Commission FP7 project 'ALERT' (FP7-SME-2008-2), works by first shining a laser beam at a stream of airborne particles. When light bounces off the particles, it scatters to form unique, complex patterns. The pattern "is a bit like a thumbprint for the particle," says Kaye, sometimes making it possible to identify a particle's shape, size, structure, and orientation by looking at the scattered light. "We can use this technique of light scattering to detect single airborne fibers that are far too small to be seen with the naked eye," he says. After identifying the fibers, the detector carries them in an airflow through a magnetic field, and uses light scattering again on the other side to tell if the fibers have aligned with the field. "If they have, they are highly likely to be asbestos," Kaye says.

The team has tested their detector in the lab and has worked with colleagues in the U.K. and Spain to develop prototypes that are now undergoing field trials at various locations where asbestos removal operations are underway. "Our colleagues estimate that it will take 12 to 18 months to get the first production units for sale, with a target price of perhaps 700-800 U.S. dollars," Kaye says. As production increases after the initial product launch, Kaye hopes that costs may be cut even further, making the detectors even more affordable for an individual plumber, electrician or building renovator. "These tradespeople are the most frequently affected by asbestos-related diseases and most who get the diseases will die from them," Kaye says. The team hopes that, over time, the new detector will help to reduce the 100,000 annual death toll that the World Health Organization attributes to occupational exposure to airborne asbestos.
http://www.medicalnewstoday.com/releases/260047.php
at August 23, 2013 No comments: 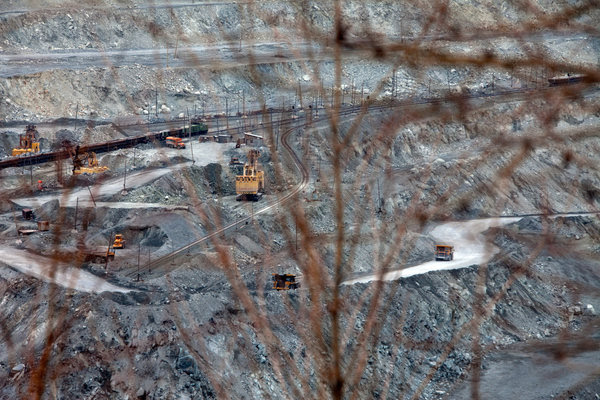 Olga Kravets for The New York Times
Every weekday afternoon in Asbest, Russia, miners set explosions in an asbestos strip mine, sending out clouds of carcinogenic dust.

ASBEST, Russia — This city of about 70,000 people on the eastern slopes of the Ural Mountains is a pleasant enough place to live except for one big drawback: when the wind picks up, clouds of carcinogenic dust blow through.
Enlarge This Image

Retirees living in Asbest, including Tamara A. Biserova, center, and Nina A. Zubkova, right.
Asbest means asbestos in Russian, and it is everywhere here. Residents describe layers of it collecting on living room floors. Before they take in the laundry from backyard lines, they first shake out the asbestos. “When I work in the garden, I notice asbestos dust on my raspberries,” said Tamara A. Biserova, a retiree. So much dust blows against her windows, she said, that “before I leave in the morning, I have to sweep it out.”
The town is one center of Russia’s asbestos industry, which is stubbornly resistant to shutting asbestos companies and phasing in substitutes for the cancer-causing fireproofing product.
In the United States and most developed economies, asbestos is handled with extraordinary care. Until the 1970s, the fibrous, silicate mineral was used extensively in fireproofing and insulating buildings in America, among other uses, but growing evidence of respiratory ailments due to asbestos exposure led to limits. Laws proscribe its use and its disposal and workers who get near it wear ventilators and protective clothes. The European Union and Japan have also banned asbestos. (A town called Asbestos in Quebec, Canada, has stopped mining asbestos, though it hasn’t changed its name.)
But not here, where every weekday afternoon miners set explosions in a strip mine owned by the Russian mining company Uralasbest. The blasts send huge plumes of asbestos fiber and dust into the air. Asbest is one of the more extreme examples of the environmental costs of modern Russia’s deep reliance on mining.
“Every normal person is trying to get out of here,” Boris Balobanov, a former factory employee, now a taxi driver, explained. “People who value their lives leave. But I was born here and have no place else to go.”
Of the half-dozen people interviewed who worked at the factory or mine, all had a persistent cough, a symptom of exposure to what residents call “the white needles.” Residents also describe strange skin ailments. Doctors interviewed at a dermatology ward say the welts arise from inflammation caused by asbestos.
The International Agency for Research on Cancer, which is a branch of the World Health Organization, is in the midst of a multiyear study of asbestos workers in Asbest. Because of the large number of people exposed in the city, the researchers are using the location to determine whether the asbestos causes ailments other than lung cancer, including ovarian cancer. “All forms of asbestos are carcinogenic to humans,” the group said.
Standing on the rim of the world’s largest open pit asbestos mine provides a panoramic scene. Opened in the late 1800s, it is about half the size of the island of Manhattan and the source of untold tons of asbestos. The pit descends about 1,000 feet down slopes created by terraced access roads. Big mining trucks haul out fibrous, gray, raw asbestos.
The Uralasbest mine is so close by that a few years ago the mayor’s office and the company relocated residents from one outlying area to expand its gaping pit.
So entwined is the life of the town with this pit that many newlyweds pose on a viewing platform on the rim to have their pictures taken. The city has a municipal anthem called “Asbestos, my city and my fate.” In 2002, the City Council adopted a new flag: white lines, symbolizing asbestos fibers, passing through a ring of flame. A billboard put up by Uralasbest in Asbest proclaims “Asbestos is our Future.”
The class-action lawsuits that demolished asbestos companies in the United States are not possible in Russia’s weak judicial system, which favors powerful producers. Russia, which has the world’s largest geological reserves of asbestos, mines about a million tons of asbestos a year and exports about 60 percent of it. Demand is still strong for asbestos in China and India, where it is used in insulation and building materials. The Russian Chrysotile Association, an asbestos industry trade group, reports that annual sales total about 18 billion rubles, or $540 million. And the business is growing, mostly because other countries are getting out of the business.

Next Page »
This article has been revised to reflect the following correction:

An article on Sunday about Asbest, a Russian city that remains dependent on the mining of asbestos despite the health perils, misstated Russia’s asbestos output in one reference. It is about a million tons a year, as the article noted at one point, not “about 850,000 tons,” the figure used in another reference. (The lower figure was from the Russian trade association’s Web site; the higher one from a more detailed year-by-year breakdown from the United States Geological Survey.)

A version of this article appeared in print on July 14, 2013, on page A16 of the New York edition with the headline: A Russian City Named for Asbestos Can’t Give Up Its Carcinogenic Livelihood.