How the future of green cars looked in 1973, from tiny to turbine-powered 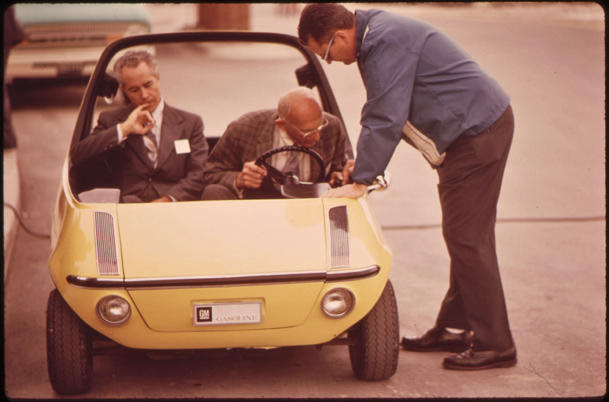 Forty years ago, the newly formed U.S. Environmental Protection Agency sent photographers out to document the nation's environmental challenges and what was being done to fix them, a cache of images recently highlighted by the National Archives for a display called Documerica. One of those photographers visited a 1973 conference in Ann Arbor, Mich., on the future of clean transportation, and caught the panoply of Detroit's answers to the question. This is not the two-seater General Motors was looking for.
The car shown above was the GM XP-512, part of a set of microcars GM built in 1969 to explore ideas such as hybrid-electric engines. The gas version above was a fiberglass body carrying a 12-hp, two-cylinder engine good for a top speed of 30 miles an hour and a range of roughly 270 miles. In that era, GM had the resources to tinker with any alternative it could envision, from rotary engines to gas turbines to exotic answers like nuclear power. That GM had patents for a gas-electric hybrid more than 40 years ago and didn't build one for its customers until 2004 (the ill-received Chevy Silverado hybrid pickup) and five years after the Toyota Prius was launched remains one of the auto industry's most historic stumbles. 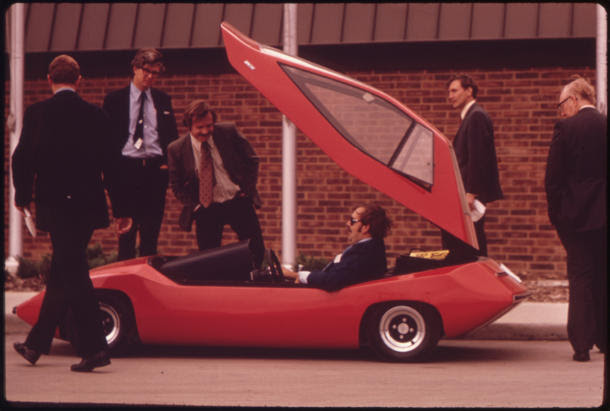 The First Symposium on Low Pollution Power Systems Development caught by EPA photographer Frank Lodge included a variety of Frankenstein-quality vehicles, like an AMC Hornet that the EPA had modified with a gas turbine, as well as a GMC bus powered by steam. One of the few all-new vehicles on display was the ESB Sunraycer, an all-electric car designed by racer Bob McKee. As Hemmings noted in 2010, McKee built three of the cars at the request of battery maker Exide to demonstrate the feasibility of a commuting EV. The Sunraycer's specs weren't bad even by modern standards — a range of 100 miles, with a top speed near 70 mph. McKee also saved weight and space by cutting out an on-board recharger; the battery tray, located on the bottom of the vehicle as Tesla does today, could slide out and be refilled with fresh lead-acid cells.
Today the technology looks as out of date as the ties and haircuts. But the dead-ends were instructive in their own way; they showed just how difficult the problem of hauling America on less energy would be for the next few decades, and beyond.