Ford Motor Company has redesigned the Ford Explorer with more recyclable and renewable materials and increased efficiency. Setting a new benchmark in automotive sustainability, the 2011 model is 85 percent recyclable and uses 25 percent recycled fiber in the interior and recycled steel in select exterior parts. It also uses the automaker’s new bio foam in the seat cushions and seatbacks.

By using recycled fiber instead of virgin fiber in the Explorer’s seating materials, Ford estimates that it reduces energy consumption by 20 percent, eliminates waste by 17 percent, and cuts CO2 emissions by 14 percent.

The Explorer is the latest Ford vehicle to feature 40 percent soy polyurethane foam in seat cushions and seatbacks. The automaker still plans to use the bio-based material in nearly 100 percent of its North American vehicle lineup by the end of the year.

Other vehicles already made with sustainable materials include the Ford Taurus, Ford Mustang, F-150, Focus, Flex, Escape, Expedition and Econoline as well as Mercury Mariner, Lincoln MKS and Navigator.

Soy foam has helped Ford reduce its annual petroleum oil use by more than 10,500 barrels.....http://bx.businessweek.com/e-waste/view?url=http%3A%2F%2Fwww.environmentalleader.com%2F2010%2F03%2F03%2Froom-for-improvement-in-e-waste-recycling%2F

What’s with the pink RV?

Irvine accountant Wayne Pinnell isn’t the kind of guy you’d expect to see drive around Orange County in a 40-foot, pink recreational vehicle.  But he does several times a week.

It’s one of the ways Pinnell, who is managing partner at the Irvine accounting firm of Haskell & White LLP, is promoting the Komen Race for the Cure in Orange County, which this year

will be Sept. 26 in Newport Beach.

He’s a “pink tie guy,” a group of men who are selected to advocate for the organization’s mission and extend support in the business community. Also, cancer hits close to the Haskell & White family, he says.

Five people in the firm, including founding partner Steve Haskell, have been diagnosed with cancer. Four have died.

As Pinnell and his colleagues discussed ways to promote the race, he volunteered his personal 40-foot recreational vehicle to be a water stop at the race. One thing led to another and he was having the RV vinyl-wrapped half in pink for Susan G. Komen for the Cure Orange County and half in tan with Haskell & White’s logo.

What happens to your smartphone data -- and is it safe? 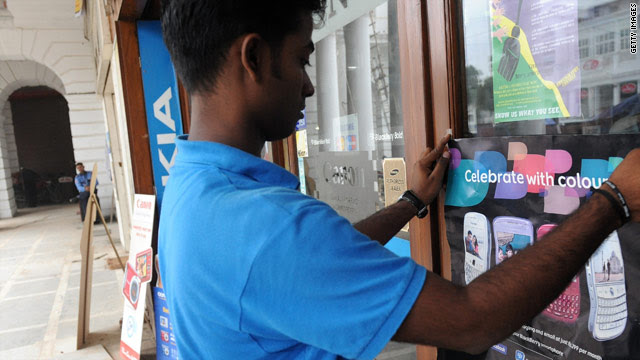 A salesman hangs a poster advertising BlackBerry in New Delhi, India, where the government wants access to data from the phones.
STORY HIGHLIGHTS
RELATED TOPICS

(CNN) -- This week, news out of the Middle East saw BlackBerry, the handheld communication device of choice in the corporate world, assailed on multiple fronts over a security problem.

The problem? It's too secure.

Governments in Saudi Arabia and the United Arab Emirates said they plan to ban BlackBerry use, at least in part, unless they're able to view messages for security reasons. India and Indonesia are reportedly considering similar measures.

The controversy has raised questions about what happens to data from smartphones and whether users should be concerned about how secure that data is.

The answers can sometimes be tricky, and differ from country to country and phone to phone. So, we've rounded up some answers to help make sense of it all.

BlackBerry maker Research In Motion (RIM) touts security as one of the phone's major selling points to its largely professional customer base.

That's mainly done in two ways -- ways that haven't made countries like Saudi Arabia and the Emirates happy.

The first line of defense is encryption -- a system that, in very basic terms, scrambles the text of messages, then unscrambles them when they reach their destination.

Systems like BlackBerry's, and those of other smartphone vendors aiming at corporate and government clients, will theoretically show up as gobbledygook if someone grabs them between Point A and Point B.

Research In Motion, the owner of the BlackBerry, says that each individual user has a key that scrambles and unscrambles their data and that no one, even RIM itself, can access that data from the outside. (Some tech analysts doubt this is 100 percent true, but that's based more on speculation than hard fact).

Second, the BlackBerry stores data from the phones on secure servers that the company itself owns. The UAE complained that since those servers are not in-country, presumably living in RIM's home country of Canada, they can't peek in when they want to.

The countries want RIM to build and use servers in their own countries, making it easier for them to enter a "backdoor" to those servers when they're investigating what they consider a national security concern.

How is data from other phones stored?

Unlike BlackBerry, smartphone makers like Apple and HTC, among others, leave it up to wireless providers or clients to manage data.

Often, that means the data gets stored "in the cloud" -- a network of data centers that quietly secure and process information from all over the world.

On its website, Apple also promotes the "strong encryption" for data sent on its phones and lists a host of other security features -- from the ability to remotely wipe data from the phone if it falls into the wrong hands to its ability to work with companies' private networks.

Google's open-source Android platform, for phones like the HTC Evo and Droid Incredible, leaves some room for chicanery. But apps like DroidSecurity, with over 2.5 million users, specialize in cloud-based protection.

So, this means governments can't get to my data?

With most phones, a government would seek data from the mobile service provider, not the phone company itself. So if you have an iPhone 4 or an old-school phone the size of a brick, a government could theoretically get access.

In the United States, that requires a court order. But laws in other countries, of course, vary.

For the record, some familiar with U.S. intelligence efforts say they have access to BlackBerry data, although the company says it never makes deals with governments to share.

Reading between the lines, this might just mean that U.S. intelligence agencies are more adept at cracking code than those in other countries.

Who else can intercept my info?

Security experts never say never. But with encryption and secure data banks, they say it's unlikely that a random bad actor could steal your transmissions in any usable way.

"If you are not a government and you are not holding the wires of the network of one of the companies like RIM or Google or Alltel, you can't really access the date the user is using or sending," said Dror Shalev, chief technical officer for DroidSecurity.

They say smartphone users are far more at risk from more mundane attacks -- from having their phones (and the data inside them) stolen to using the phone's web browser to click bad links.

"With mobile devices, a lot of the privacy and security risks are really similar to what we've seen with desktops and laptops," said Doris Yang, mobile security product manager for digital security company Symantec.

"A lot of it really does hinge on common sense. Whether we're talking about information stored on your device or in some storage facility, the same rule applies -- you shouldn't be sending out personal information."

Tip For Prospective Terrorists: Your Bushy Beard Has Got To Go

a person can , tackle Mt Whiney California most of the way.....barefoot....http://www.facebook.com/home.php?#!/thomasmabercrombie

International picture of the year

First Place
Todd Heisler The Rocky Mountain NewsWhen 2nd Lt. James Cathey's body arrived at the Reno Airport, Marines climbed into the cargo hold of the plane and draped the flag over his casket as passengers watched the family gather on the tarmac.During the arrival of another Marine's casket last year at Denver International Airport, Major Steve Beck described the scene as so powerful: 'See the people in the windows? They sat right there in the plane, watching those Marines. You got to wonder what's going through their minds, knowing that they're on the plane that brought him home,' he said 'They will remember being on that plane for the rest of their lives. They're going to remember bringing that Marine home. And they should.'Second Place

Second Place
Todd Heisler The Rocky Mountain NewsThe night before the burial of her husband's body, Katherine Cathey refused to leave the casket, asking to sleep next to his body for the last time The Marines made a bed for her, tucking in the sheets below the flag. Before she fell asleep, she opened her laptop computer and played songs that reminded her of 'Cat,' and one of the Marines asked if she wanted them to continue standing watch as she slept. 'I think it would be kind of nice if you kept doing it,' she said. 'I think that's what he would have wanted'

Email ThisBlogThis!Share to TwitterShare to FacebookShare to Pinterest
Labels: US Marines